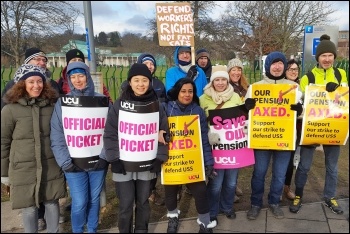 Striking lecturers at the University of Nottingham, 27.2.18, photo by Gary Freeman   (Click to enlarge)

As University and College Union (UCU) members hit the midpoint of our 14-day programme of escalating strikes, it's pretty clear from the picket lines that years of fees, cuts and marketisation have created an army of low-paid and casualised lecturers, tutors, researchers and support workers, and a supporting cast of furious students.

We've had years of real-terms pay cuts and an explosion of insecure contracts. To lose our pensions as well is the final straw. The pickets are determined, they're organised and they're ready to see this through.

We had to strike for two days before Universities UK would even agree to talks, but local managements have issued threats to dock the pay of staff, not just on strike days but when they are working to contract as well!

Already three universities - Sheffield, St Andrews and Keele - have had to issue public retractions and apologies on pay deductions in response to campaigning and we expect more to follow. At Sheffield, not only were heads of department either on strike or unwilling to carry out punitive pay deductions, but alumni of the university began a #DonationStrike on Twitter in solidarity, donating to our local branch hardship fund instead of to the university!

At local level management are desperately trying to placate our members, with Imperial College London now saying they're prepared to maintain our current pension scheme. It's been difficult to keep up with the rapidly growing number of vice chancellors publicly claiming they understand why we're striking and want to resolve the dispute.

But Universities UK, which met with UCU for the first time on 5 March, has given no concrete commitments on any aspects of UCU's proposals to save our pensions.

The employers don't seem to fully understand the power they've unleashed. As we enter the third week of action, picket lines have only gotten stronger and we've received unbelievable support from students and other unions. When UCU has offered a lead, university workers have shown a determination to fight.