School staff and parents fear the worst. Public Health England figures show that the highest test-positivity rates are now in the 10-19 age group, but schools are still expected to remain open

Under pressure from their own failures to make sure schools are in a position to safely open more widely, the Tories have committed to providing £1 billion for schools next year

Only a national plan and workers' control can guarantee a safe exit from lockdown: There is a growing scientific consensus that successful management of the coronavirus crisis requires a comprehensive plan - combining mass testing, contact tracing and supported isolation of potentially infected individuals, writes Martin Powell-Davies, Socialist Party national committee.

And promises to abolish tuition fees, among other measures

"Why would we want more privatisation?!" This is how the National Education Union (NEU) rep at Cumberland school in Newham, East London, closed the picket line meeting to stop the school becoming an academy.

Rather than allowing the press to whip up division between pedestrians, cyclists and drivers, we should be united in demanding urgent transport investment

The government has declared that it will begin forcing all schools to become academies. This is a huge attack which requires a huge response from the trade unions, teachers, parents and students.

No such thing as a 'free' school: Cameron's election campaign promises that the Tories will open hundreds of new 'free schools' in England. But when did the Tories ever give away anything free, except to their friends in big business?

NUT union members from Sedgehill and the three Prendergast Federation schools, in Lewisham, south London, came out on strike on 12 February against the threat of forced 'academisation' 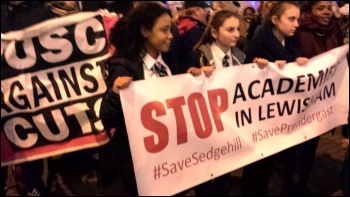 No to Academies!: Parents, teachers and school students in Lewisham are angry. Labour-run Lewisham council in south London plans to dismiss the governors and headteacher at Sedgehill school and impose an 'interim executive