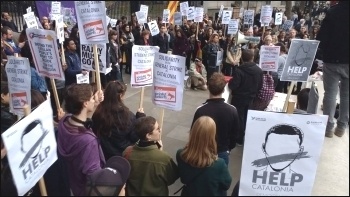 Supporting the general strike in Catalonia

Around 300 people attended a solidarity protest on 3 October outside Downing Street in London to support the general strike in Catalonia taking place that day.

The call to protest was made by a number of organisations, including Catalan groups in London and Socialist Students societies, all outraged at the horrific police brutality of the Spanish state on 1st October - the day of the Catalan independence referendum.

Socialist Students at Kings College London and Goldsmiths University had originally called a protest outside the Spanish embassy, but after discussion with Catalan groups, moved it to Downing Street to call on the government to condemn the violence by Spanish state forces.

The general strike in Catalonia on 3 October had been called in response to the repression by the Spanish government in the run-up to the referendum. 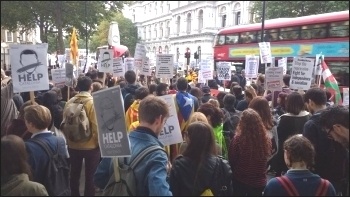 During the London protest there was a palpable mood of pride in the valiant defiance of the two million plus Catalans who still voted, with an overwhelming 90% majority for independence, despite the worst police repression in western Europe in a generation.

Socialist Students ran an open mic, with many Catalan speakers contributing as well as others from around the world. A number of trade unionists brought solidarity, as did the Committee for a Workers' International (CWI) and the Socialist Party.

Tamil Solidarity also came and gave their support, and led us all in chanting: "Fight for the right to self-determination".

Some of the speakers were on the verge of tears, describing the scenes they had witnessed on Sunday 1st October. The spirit of solidarity and resilience was truly inspiring, and the songs of Catalonia moving to hear. 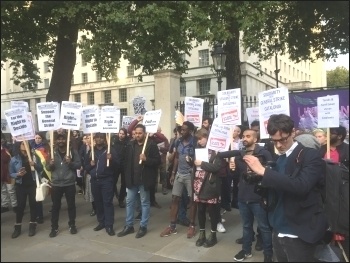 Socialist Party speakers called for the linking of this struggle to a wider movement against austerity and capitalism in general, a message that was received well.

We fully support the freedom of nations to have the right to self-determination. Also we pointed out that the working class and youth of Catalonia don't want to replace their oppressors in the Madrid-based People's Party government led by Mariano Rajoy with a new Catalan 'Rajoy'.

Added to this was an understanding of the role of the capitalist EU leaders in supporting the Spanish state by not condemning its violence. One Catalan speaker said that the EU is clearly not about internationalism, the events in Catalonia expose it as being about making money and protecting banks. This received a massive cheer.

Interest in socialist ideas was shown in the 35 copies of the Socialist that were bought, the many Socialist Party leaflets (in both English and Catalan) taken, and the number of students who enthusiastically signed up to participate in Socialist Students groups. 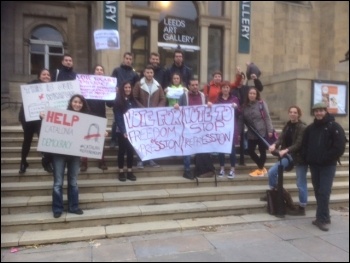 Solidarity with Catalonia from Leeds, photo by Ros Campbell   (Click to enlarge)