Lessons for the socialist movement - then and now

100 years ago, during the carnage of World War One, a small number of socialist delegates assembled at an anti-war conference in Zimmerwald, Switzerland. As Robert Bechert explains, it marked an important step in rebuilding the international workers' movement that had been shattered by the earlier failure of the Second International of socialist parties to prevent world war. 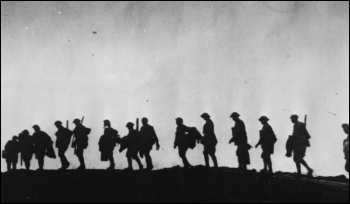 The carnage of World War One   (Click to enlarge)

Advances and retreats, victories and defeats, have characterised the history of the socialist and workers' movement.

This year's U-turn by the Syriza leadership in Greece - from opposing to implementing austerity - is not the first and, unfortunately, will not be the last example of 'socialist' leaders who refuse to break with capitalism and instead end up implementing anti-working class policies.

Activists must learn politically and organisationally from these experiences and use this understanding to help the workers' movement recover and move once again onto the offensive against capitalism.

By coincidence this is the 100th anniversary of a very significant step in the rebuilding of the socialist and workers' movement after a much more serious defeat, the plunging of most of Europe into the murderous World War One.

In early September 1915, 42 delegates from eleven countries attended the first international conference of socialist parties and political currents opposed to that war. The conference's 'Zimmerwald Manifesto', drafted by Leon Trotsky, played an important part in helping to build the struggle against the pro-war leaders of most workers' organisations, the war and the capitalist system itself.

In August 1914, at the outbreak of war, the vast majority of socialist activists were stunned when the leaders of most of the socialist parties in the combatant countries supported 'their own' ruling classes. They were shocked because up until then these parties, and the Second International they belonged to, had repeatedly declared that they would not support such an inter-imperialist war.

But instead, as war broke out a majority of leaders of the workers' organisations on both sides rapidly moved to cooperate with their own capitalists.

This capitulation mainly reflected the fact that these leaders had become absorbed within the capitalist system and had no desire to challenge it. (See '1914 - The capitulation of the Second International' www.socialistworld.net/index.php/6850)

The war had revealed how organisations painfully built up to help emancipate the working class had, in the hands of pro-capitalist leaders, become instruments to help the ruling class maintain their rule. The question was not just to change policy, but to remove pro-war leaders and forge workers' organisations seriously committed to ending capitalism and the repeated wars.

A sharp battle of ideas opened up. The workers' movement in many countries had an internationalist tradition which made many anti-war activists see their struggle as not just being against war, but as part of rebuilding an International that would fight capitalism.

In this political battle Lenin and the Bolshevik party in Russia clearly argued for drawing both political and organisational conclusions from the August 1914 collapse.

Politically this catastrophe flowed from an adaption to capitalism that led to the growth of pro-capitalist strata within the workers' movement leadership.

The ideological lines had to be very clearly drawn to establish a firm basis for rebuilding the workers' movement. The Bolsheviks argued that a new International was needed, one that had learnt the lessons of the Second International's collapse.

It was with these ideas that the Bolsheviks participated in moves to draw together the socialist opposition to the war and take concrete steps towards rebuilding the international movement. This included cooperating with other forces which did not really have a revolutionary opposition to war.

The conference, made up of different political forces, saw sharp political debates.

There was a right wing not wanting to condemn those socialist parties that had supported financing the war. And a Left, led by the Bolsheviks, that argued for a clear denunciation of those 'socialist' leaders supporting the war and for a "revolutionary struggle against capitalist governments".

This meant a complete break from both the pro-capitalist and hesitant 'centre' currents in the workers' movement and a determination to try to utilise the crisis caused by the war to end capitalism.

Although the Zimmerwald Left's resolution was defeated, the Bolsheviks and the Left voted for the Conference's Manifesto because it was a "call to action".

The Manifesto had a big effect, despite the attempts to crush it. Its publication was banned in Austria-Hungary, France, Germany and Russia. But this did not stop it becoming an important beacon of not just opposition to the war but of rebuilding the international workers' movement as a fighting, socialist force.

Within months it became a rallying cry in the struggle against the pro-war and pro-capitalist forces.

The Zimmerwald conference was a stepping stone in the building of the worldwide revolutionary movement that followed World War One and the 1917 Russian revolution. A movement whose experiences provide important lessons for today's activists struggling to end, once and for all, bloody capitalist rule.

75 years ago (21 August 1940) the greatest living revolutionary of the time, Leon Trotsky - an implacable opponent of both capitalism and totalitarian Stalinism - was murdered by Josef Stalin's hit man, Ramon Mercader.

The Committee for a Workers' International (CWI), re-publishes an article on the subject from 2010 by Peter Taaffe (general secretary of the Socialist Party, England and Wales). See www.socialistworld.net