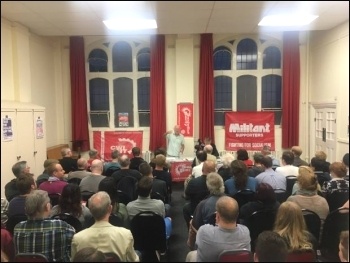 It was "standing room only" at a packed Coventry Socialist Party public meeting on 25 August.

People came from all over Coventry to hear Socialist Party General Secretary Peter Taaffe speak on "Trotskyism, the Militant tendency, the Corbyn insurgency and the struggle for socialist change."

Peter Taaffe outlined the role of Trotskyism in the 21st century, the role of Militant and its successes in Liverpool and Coventry, how Militant led the campaign against the Poll Tax which brought down the Thatcher government, while also discussing the current Corbyn insurgency and the Socialist Party's role now and in the future.

Peter discussed the role of the Militant leadership in Liverpool City Council in the 1980s who refused to make cuts, redundancies and closures. Instead, the council set a 'needs budget' with the support of a mass movement of local trade unions and communities against the Tories, to fight for the money the city needed. The council won, with the Thatcher government providing millions of pounds more to Liverpool council, allowing it to build 5,000 more houses and creat thousands of jobs, with not one job lost!

Compare the fighting stand taken by Liverpool council, building homes and community facilities, with Coventry City Council that is closing libraries, public toilets and children's centres. Quite a contrast!

On the issue of the Poll Tax, Peter outlined how it was the Militant that mobilised the mass non-payment which eventually led to the downfall of Thatcher.

Both Dave Nellist in his introduction and Peter in his speech made clear that it was these huge victories of the working class, aided by the leadership of Militant, that have fuelled the attempts of the establishment and right wing of Labour to whitewash history and attempt to discredit Trotskyism and the history of the Socialist Party.

He also discussed the election successes of Dave Nellist and the example he set as a Coventry MP in only taking the average wage of skilled workers within his constituency. Peter highlighted that you can only represent working people if you're going through the same struggles as they are, a point that was also taken up in the contributions from the floor.

Talking about the role of the Socialist Party after its leading members were expelled from the Labour Party, Peter set out how we have been the only 100% anti-austerity alternative within politics. While many would agree that the election of Jeremy Corbyn was a massive victory for the labour movement, this is undermined when the likes of Sadiq Khan aren't helping those being evicted in Walthamstow by rip-off landlords. It is the Socialist Party that is organising occupations and protests to help these people.

Following Peter's remarks there were many interesting contributions from the floor, including from Labour voters arguing for deselection of right-wing MPs and expressing their disgust at Labour councillors passing on Tory cuts to working people. One attendee stated that if he hadn't have joined the Socialist Party last week, he 'definitely would have done so tonight'!

The discussion brought forward many good contributions and questions. For example the campaign for a £10 an hour minimum wage was raised and whether this is "idealistic", to which Peter argued that in reality tax credits are used to subsidise big companies who, whilst making massive profits, say they can't afford a proper wage for their workers.

The key question for socialists is the question of the system itself, capitalism. Britain is a very rich country (as is the world), the problem is the wealth is concentrated at the top. We support all reforms and campaigns that fight for greater equality and for a better life for working class people. At the same time, we point out that we need to get rid of the capitalist system and replace it with socialism.

As well as supporting this there was resounding support for the demand that Coventry City Council should set a no-cuts budget and stop the cuts being passed on to working people. Instead a movement should be built much like the Liverpool council did, taking on the Tories instead of doing their job for them, with this tying in to further building the whole movement against austerity.

The meeting highlighted that the attacks on Trotskyism and the Militant have not deterred people, but have increased the interest in our ideas and organisation. Many young people and also people of all ages attended the meeting. They were not put off by the term 'Trot' or 'entryist' and instead wanted to learn more about these labels. One union rep from the railways commented afterwards: "I have learnt so much today and am definitely looking forward to Socialism 2016 in November!"

This version of this article was first posted on the Socialist Party website on 29 August 2016 and may vary slightly from the version subsequently printed in The Socialist.