The 2.6 million-word Chilcot report in essence acknowledges that the devastating war on Iraq and occupation was completely unjustifiable

Abolish child labour! End the persecution of campaigners in Iran

War fan Tony Blair could face charges over his role in sending British soldiers to Iraq. A cross-party group of MPs wants him prosecuted if the Chilcot report shows he lied to get support

The letter the Guardian wouldn't print: That the serious issue of anti-Semitism is being used as a proxy charge against Jeremy Corbyn's leadership of the Labour Party is confirmed by the high-profile role of John Mann MP. 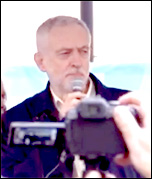 Socialist Party general secretary Peter Taaffe sent the following letter to the BBC following a suggestion on BBC2's Newsnight (27.4.16) by Baroness Julia Neuberger that Militant was involved in anti-Semitism in the Labour Party in the past

The latest stage of the refugee crisis has seen the EU strike a dangerous deal with the Turkish state to try to reduce the number of refugees reaching Europe.

Thousands march in solidarity with Kurds in Turkey