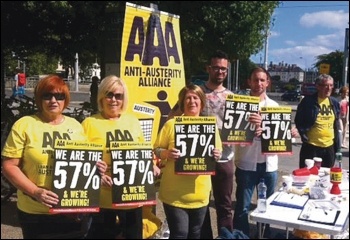 On Saturday 29 August a massive protest against the imposition of water charges by the Fine Gail/Labour party governing coalition took place in Dublin, Ireland. Organisers say over 80,000 people participated.

Paul Murphy, Socialist Party member and Anti-Austerity Alliance TD (MP), said the turnout showed that the government is on the run over water charges and the boycott payment campaign.

A political vendetta by the establishment has meant that Paul along with other anti-water charge protesters, are facing criminal proceedings - including a ludicrous false imprisonment charge of the deputy prime minister - arising from a sit-down protest in Tallaght, south Dublin, last year.

Now there are revelations about a spying operation led by the Garda Commissioner's husband against anti-water charges protesters ('Operation Mizen').

And in a further attack on democratic rights, the AAA has been refused a permit for door to door collecting in Tallaght because: "The proceeds of the collection... would be used in such a manner as to encourage... the commission of an unlawful act"! 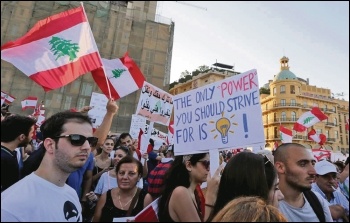 Protesting against uncollected garbage in Lebanon   (Click to enlarge)

"This issue has exposed the collusion between establishment parties and big business interests, and the rampant corruption underlying it. Those who suffer from this crisis are ordinary residents in the capital, Beirut, and other cities, since the rubbish has not been collected for weeks." 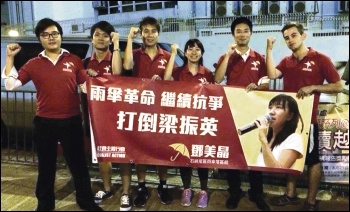