Build the anti-war and anti-austerity movements

Theresa May, leading a Tory government with no majority, used 'royal prerogative' to authorise the bombing of Syria, afraid of losing a vote in parliament. The Tory cabinet rallied behind her with no waiting for the ground investigation in Syria to even begin into whether the Syrian regime had used chemical weapons.

The military jets were dispatched in the face of polls showing that more people in Britain opposed the action than supported it. Cruise missiles - valued at £790,000 each - were fired, in a grotesque competition between May and French president Macron to be the main European backer of Trump's much stronger US force.

Over 500,000 people have died in the Syrian war and 11 million have been displaced. This so-called 'humanitarian' bombing on science institutions and other sites did nothing to aid their plight and only added to the destruction. It also aided Syrian president Assad who could use it to bolster his support in the areas he controls.

The three western powers were using their chillingly sophisticated missiles to flex their muscles in a country which is being torn apart by many outside interventions, all leaning on one or another of the military forces involved in the raging internal wars.

The anti-war movements internationally must be built to become strong enough to achieve the withdrawal of all foreign interference. It is the task of the Syrian people - through building democratic workers' organisations - to end the war and possible future attempts by any side to use chemical weapons.

Genuine solidarity with that struggle can only come from workers' organisations in Britain and worldwide, as they represent the class in society that has no interest in imperialist face-saving or the seeking of profits and influence.

Jeremy Corbyn was right to call for a parliamentary vote on the military action, as a possible means of inflicting a serious defeat on May, as was done against Cameron on a similar issue in 2013. But as a succession of right-wing Labour MPs lined up to side wholly with May, attacking Corbyn and his anti-war position, these events show yet again the urgency of candidate reselections to remove these representatives of capitalist interests from Labour.

Whatever the outcome of votes and decisions in parliament on Syria - or by the United Nations - socialists will remain firmly opposed to military intervention. This principled opposition must go alongside helping to build the anti-war and anti-austerity movements into forces that can accelerate the end of May's government. For the Labour Party to be an effective political voice for those movements - and be positioned to be an anti-war government - its left wing needs to move to ensure that its MPs reflect the views of the party members and trade unionists they should be representing.

The article below was posted on our website in the days before the bombing took place. 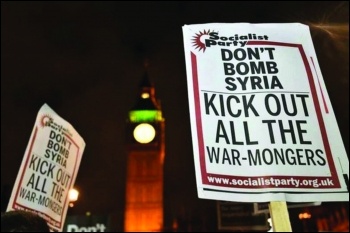 Build a mass movement against the war

Donald Trump's administration is gearing up for another possible round of missile strikes against regime targets in Syria.

This could trigger an explosive chain of events potentially leading to a more serious military conflagration between major international and regional powers in the Middle East.

Moscow has responded to Trump's open threats by saying it would target US units involved in any attack on Syrian soil.

Both Trump and British Prime Minister, Theresa May, are going through turbulent political times, and are in need of diverting attention away from the woes of their administrations.

In Britain, it has been very convenient for May that the alleged chemical nerve attack, with no concrete evidence provided, took place in the run up to this crisis.

Along with France, where President Emmanuel Macron grapples with a new wave of working class action, and Saudi Arabia that has offered facilities to support the other three, all are ratcheting up their rhetoric and flexing their muscles against Assad's regime and its supporters in the Kremlin.

They are cynically using the pretext of a reported recent chemical attack in Douma, the main city of Eastern Ghouta in the suburbs of Damascus, for this purpose.

This abhorrent attack, which has allegedly killed dozens of people, is blamed, without as yet any substantiated evidence, on Bashar al-Assad's regime and its foreign backers.

To be sure, Assad's regime has defended its corrupt rule over the years through rivers of innocent people's blood. The CWI does not give an inch of support to this brutal reactionary regime, nor to its Russian and Iranian patrons.

Yet why would the Syrian army launch a chemical attack now, bringing down the wrath of the western imperialist powers? While not ruled out, the tactical logic behind such a decision is not obvious. Military victory in Eastern Ghouta was indeed within the regime's grasp, entrenching Assad's hold over most of Syria's urban centres.

Some commentators have speculated that this recent attack might have been initiated by "rebel" jihadist forces in order to draw US imperialism deeper into the conflict.

Regardless of who is responsible for this attack, the urge to use it as an excuse for another imperialist intervention in the Middle East should be rejected and resisted outright.

Fifteen years after the invasion and occupation of Iraq, millions of people remember the lies of ruling politicians and their friends in the pro-establishment, pro-corporate media at the time in order to justify that calamitous war.

Justifiably, many are hence not ready to uncritically lap up the official version of events presented now by western governments and mainstream media outlets.

Other western interventions into Afghanistan, Libya have also been a disaster for the peoples of the area and have only worsened the crisis.

The war in Iraq precipitated the decline of US imperialism in the Middle East; the ongoing war in Syria has exposed it further, providing an open space for Russia and Iran to expand their regional influence.

This, combined with Trump's administration move towards a more outright and naked support of Iran's arch enemies, Israel and Saudi Arabia, has brought regional tensions to a very high pitch.

Tensions in the region between the main powers, precariously kept in check during the battle against ISIS, have now come back to the fore with renewed intensity, as ISIS' proto-state has all but crumbled.

Recent developments have seen an escalation in "inter-State" military skirmishes on Syrian territory, with a deeper military engagement from Israel, Turkey, Iran and others.

Trump's air strikes are likely to be a show of strength of limited duration, along the lines of what happened in April 2017, when the US navy fired 59 Tomahawk cruise missiles at a Syrian airbase.

Broader options, such as an all-out war for "regime change", would not only risk dragging the whole region into the flames of a major war, but would also hasten major political and social convulsions in Western capitals and across the globe.

But war has a logic of its own, and new US airstrikes in such a combustible situation could lead to unintended consequences.

As inter-imperialist tensions rise in the Middle East and across the globe, the ruling classes' sheer hypocrisy and double standards are reaching staggering proportions too.

Accusing Assad of "disregard for human lives", Trump, May and Macron have all recently rolled out the red carpet for Saudi Crown Prince Mohammed Bin Salman, the architect-in-chief of the carnage and deliberate starvation of Yemen, which is killing a child every ten minutes on average.

All went overboard to congratulate counter-revolutionary butcher al-Sisi for his recent farcical "re-election" in Egypt; all gave a de facto free pass to Turkish President Erdogan's ethnic cleansing operation in Afrin, as well as to Israeli snipers liberally gunning down unarmed Palestinians in Gaza - the condemnation of which US imperialism vetoed at the UN Security Council.

None of the commentators displaying outrage at the use of chemical weapons to justify a new military aggression in Syria raised any eyebrows when last year, the US army made use of white phosphorus in heavily populated areas of Mosul and Raqqa in the battle against ISIS.

Hundreds of civilians could apparently then be dispensed with and their cities obliterated in the name of the "war on terror".

The same logic has been used by Assad and Putin supporters to try and rationalize murderous sieges and brutal bombings of civilian populations living in areas of Syria held by armed rebel groups, most of which are of an Islamic-fundamentalist inclination - like the Salafists of 'Jaysh al-Islam' who were until recently in control of Eastern Ghouta.

In reality, the murderous rampage of Assad and his allies, like the civilian killings brought along with Western imperialist "liberation" from ISIS, combined with the mass poverty and alienation of millions, are likely to act as recruiting agents for future extremist Sunni armed groups - unless they are challenged by a genuine alternative.

In parallel, the actions of ruthless armed gangs of the Salafist and jihadist types have helped Assad to maintain - through fear - control over important sections of the population.

A new round of imperialist airstrikes would have the same effect, reinforcing Assad's narrative comparing his regime to a fortress defending itself against domestic and external terrorist and imperialist enemies.

The CWI vigorously opposes all military strikes on Syria, along with any foreign interventions and meddling in the country.

The bloodshed and destruction, which has gone on almost unabated for the last seven years, need to be stopped, not heightened further.

This is a task that all existing capitalist and imperialist powers involved in the region, struggling between them for power, prestige and profit, have shown utterly incapable of doing.

There simply can be no solution to the horrors confronting the Syrian people on the basis of this rotten system.

Whereas the Syrian people are bearing the full blows of counter-revolution and war, an important and powerful working class exist in countries such as Iran, Turkey and Egypt.

Allied with the region's poor and oppressed, and joining hands with a much needed anti-war movement in the West, such a force, armed with democratic socialist policies, can show a way out of the nightmare confronting Syria and the wider Middle East.

This version of this article was first posted on the Socialist Party website on 13 April 2018 and may vary slightly from the version subsequently printed in The Socialist.