Search site for keywords: Them & Us - US - China - Workers - Parliament - Migrant workers

Them and us fishes, image by Suzanne Beishon   (Click to enlarge)

Among the 5,130 appointed 'delegates' attending the NPC and its sister body, the 'Chinese People's Political Consultative Conference' (PCC), there will be 104 dollar-billionaires: 45 in the NPC and 59 in the PCC.

Their total net worth amounts to four trillion yuan ($624 billion), more than double Ireland's GDP. This is the richest 'parliament' in the world by a very big margin. 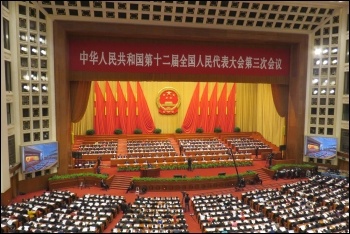 Meanwhile, average residential property prices have risen 23% in the past year in China's ten largest cities. This is a faster rate of increase than any single year in the US housing market.

Millions of city people are taking on extreme levels of debt in order to buy a home. At the same time, millions of migrant workers are being evicted from the major cities in a social cleansing campaign against what the Chinese 'Communist' Party calls the "low-end population."

Tens of millions of workers, especially in the service sector where most new jobs are created, are driven into precarious informal work as 'agency workers' or 'individual contractors'. Their rates of pay and working conditions are worse than in the factory sweatshops, many of which have moved to cheaper countries.

The number of workers' strikes each year has risen sevenfold during the first five-year term of Xi Jinping's presidency.