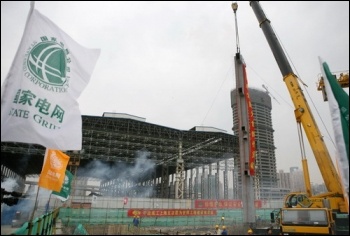 Crane drivers in China's construction industry have taken strike action in dozens of cities across the country. It is quite simply the most impressive, coordinated and daring action taken by any group of workers in China for many years.

The strike embraced 20 of China's provinces. A striking worker in Chengdu, just one city in one province on strike, told The Global Times newspaper, "There are at least 10,000 crane operators in Chengdu appealing for a salary raise."

The strike faces the world's most powerful dictatorial state.

China's crane drivers, like almost all construction workers, are mainly migrants from poorer rural regions. Like most migrant workers they are hired casually, without job contracts, pensions or medical insurance. Crane drivers work under extreme pressure, on long shifts, without toilet breaks or rest periods.

Construction sites in China famously work around the clock. "If we are required to work for eight to nine hours, and then work more overtime at night, there will be no extra pay," one crane driver from Henan told Radio Free Asia. "You can work overtime until two o'clock in the morning, and the boss won't care. You can still have to work tomorrow as well."

We are witnessing the stirring of a giant. Half the world's construction sites are in China and its construction workforce numbers around 60 million. It is a major contributor to China's GDP.

Chinaworker.info declares our full solidarity with the striking crane drivers, to fight for the realisation of their demands in full. We deplore the state repression against these workers and call for international workers' solidarity with the strikes, and the release of the arrested strikers. The need for independent workers' unions is once again underlined by this struggle, which also shows the enormous potential power of China's working class.