Letters to the Socialist's editors including the general election, Militant in Liverpool, the Holocaust and football.

A discussion took place regarding the change in constitution and what many see as an abuse of power by Momentum chair Jon Lansman. The attendees agreed a declaration strongly opposing the steering group's decision.

The attempted scabbing operation by Glasgow Labour council in an effort to undermine Unison's strike action against privatisation of ICT services has been pushed back.

Birmingham Labour Party is reported to be excluding members who joined on or after July 2015 from selecting Labour candidates for the 2018 elections.

Southampton Labour Party recently held their AGM as the councillors in the cabinet voted through a further round of budget cuts.

Momentum national committee (NC) members and reps from local groups met in Birmingham on 5 November to "discuss recent events and, most importantly, consider ways to overcome the resulting differences and move forward together". 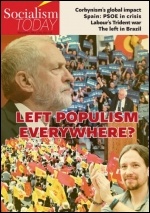 Corbynism and the rise of left populism

Jeremy Corbyn, through mass support, fought off the attempted coup by Blairite MPs and their supporters; even increasing his majority in the second Labour leadership contest in 12 months. But the Labour right and behind them the strategists of British capitalism remain unreconciled to his victory