No backtracks, no compromises: we must fight for real democracy in Labour

Mandatory reselection is not about intimidation as those seeking to smear Corbyn and his supporters attempt to claim. It is basic democracy.

The debate about the correct approach for the Corbyn movement is manifesting itself within the trade union movement too.

#CorbynWins: When Jeremy Corbyn's Labour leadership re-election victory was announced, members of the Socialist Party were on the streets of Liverpool engaging with Labour Party conference delegates, visitors and the public.

A 'dossier' has been submitted to the media by a right-wing clique which claims, in the words of Ms Ellman [MP for Liverpool Riverside], that "the Momentum group have been working to subvert not only the local Labour Party but also to undermine the admirable work of Labour-led Liverpool City Council, who have been doing an outstanding job in the face of savage Tory cuts."

Is backing Blairites at elections necessary to defeat the right's lie that Corbyn's Labour is 'unelectable'? A reader wrote a letter to the Socialist's editors raising this important question. The editors respond. 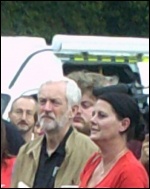 Only semi-behind the scenes the Blairites are scrambling around making contingency plans for if Corbyn wins - as they realise is increasingly likely. 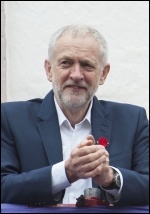 Attempting to defeat the movement behind Jeremy Corbyn are all the forces of the capitalist establishment. It would be wrong to be complacent about Labour's leadership election. Nonetheless, so far each attempt by the right at gerrymandering has been thwarted.

"Let us be honest", said Sean Hoyle, president of transport union RMT. "Why should we fear a split? I'd rather have a party with half a million members and 40 MPs who are loyal to those members, than a party led by 172 traitors. It's time for the tail to stop wagging the dog."

Reports of some of the rallies and meetings in support of Jeremy Corbyn.

It's a victory - reflecting enormous pressure from Labour members and trade unionists - that the attempt to stop Jeremy contesting a new Labour leadership election has been defeated.