'Engage for Change' held an online, virtual festival on 25 July. Engage for Change aims to educate young working-class people on the role of trade unions through music and the arts.

"90% of UK venues and festivals face closure" warned a report from the Music Venue Trust in June. Like many other service industries, the live music business has been left on a cliff edge

Cardiff council has cut essential public services and facilities, and attacked other cultural institutions such as the library. Now it is coming for our fun as well

The first edition of the 'Bad Art' magazine was produced in July 2016. It signalled the creation of a new project aiming to build from the ground up in working class neighbourhoods, to challenge capitalism's

Seeing alternative rock four-piece Enter Shikari in Cardiff turned out to be less a show and more an all-out assault on practically all our senses. And it was awesome!, writes Ronnie Job. 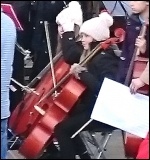 Trade unionists, including representatives of Swansea Trades Council and council workers, took part in the lobby but by far the biggest contingent was of teachers, pupils and supporters of West Glamorgan Youth Music Service, who are facing devastating cuts in funding.

Spare a thought for the poor members of Carlisle Socialist party. With the post-floods mood and ongoing rain dampening down outside activities, we were forced into the Milbourne Arms.