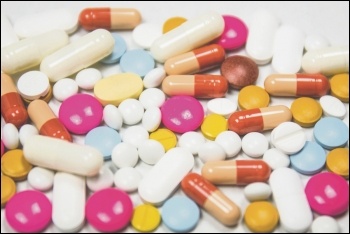 Among all the other Brexit-related headlines, the latest crisis announced has been a projected shortage of generic, out-of-patent medicines.

The NHS was reportedly paying higher prices to suppliers of 80 products in December to shore up its supplies. According to Oxford University researchers, last month the total cost of these generic drugs was £37 million instead of the 'normal' £11.4 million.

But this isn't the first time in recent years there has been a spike in drug prices coinciding with projected shortages. In November 2017, 91 medicines were on the price concessions list (allowing companies to increase what they charge for them).

In reality, there are a number of factors that can lead to such shortages. These include increasing global demand and issues with the supply of raw materials. But linked with this are problems stemming from the nature of capitalist, profit-driven markets.

To boost profits, many companies cease to manufacture generic products in favour of more expensive and profitable patented brands. What's more, as the Healthcare Distribution Association has suggested, companies can stockpile medicines in a speculative fashion to make money as further shortages develop.

This rigging of the market in the interests of private profit, with scant regard for the healthcare needs of the population, is the dominant feature of the pharmaceutical industry.

According to a recent study, two thirds of patient groups appraising pharmaceuticals for regulatory body NICE receive funding from the very companies they are meant to be judging.

The government's own website to attract Big Pharma investment in the UK boasts an Effective Tax Rate of between 11% and 13%. 30% of all drugs used worldwide were developed in Britain.

The UK's pharmaceutical industry is dominated by two giants, GlaxoSmithKline and AstraZeneca. These are the fifth and sixth largest drugs companies globally, both with profits over £2 billion in 2017.

Instead of subsidising their profits with tax breaks and guaranteeing large payments from the NHS, they should be nationalised under democratic workers' control and management.

This would allow production to be directly linked with what is needed in the NHS. It would free up funds that currently go to the vast profits of these companies for increased investment in research - helping to pave the way for fresh advances in the treatment of disease.

Drug production could be democratically planned by workers in the sector, the NHS and patient groups, and with the involvement of wider society.

Such measures, which would need to be taken as part of the socialist transformation of society, could inspire workers around the world who are struggling for decent health care and against the capitalist system.

Such a movement for socialist change would demand the multinational big pharma companies like Pfizer, Novartis, Merck, Sanofi and others are brought into public ownership - paving the way for a fully integrated, publicly owned and democratically run health service. In this way research data would no longer be hidden for commercial confidentially, but instead shared.

In this way we could begin to tackle global health problems in a coordinated fashion - to the benefit of all.