On 12 May, NHS England released its plans for a new system called "General Practice Data for Planning and Research"

Working-class women have suffered enormously during the pandemic. We've been disproportionately hit by job losses, pay cuts, and the additional burden of home schooling and childcare.

One in three women will have an abortion before the age of 45. The abortion pill is a safe and uncomplicated medical procedure carried out in the first ten weeks of pregnancy.

Huge sums of money were thrown at dubious businesses

The government's new contact tracing scheme is outsourced to Serco - which subcontracted recruitment to Capita, writes a NHS contact tracer.

Terrified staff are without adequate PPE 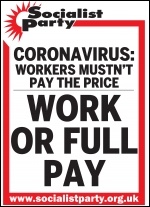 The coronavirus crisis has exposed the complete inability of the capitalist market economy, based on profit and competition, to meet the needs of working-class people.

From April 2017 NHS charges for prescriptions and dental treatment in England are set to rise yet again, writes Bea Gardner, Southampton Socialist Party.

NHS England chiefs tried to cover up more than half a million missing medical letters, it seems

Despite millions being spent on state of the art buildings in 2007 and 2013, NHS England is now proposing closing all or most of them and building new hospitals in a different location.