Striking back against the sackers' charter at Leeds University 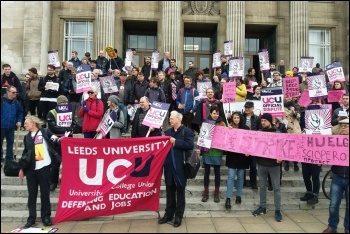 The dispute revolves around changes such as introducing a catch-all dismissal criteria as well as removal of medical and legal independent specialists on some panels.

On the eve of the strike, university management sent out a communication which denied that such changes would impact on academic freedoms. They argued that this would be secured by an academic representative of the university executive group who would adjudicate whether this had been infringed!

Local Socialist Party members have been working hard to mobilise support for the strike from local union branches and among students at the university.

In particular, Socialist Students at Leeds University has spent the last few weeks organising solidarity with the strike. Our leaflets explained why students should support the strike and appealed for other groups to take solidarity photos. We also held a meeting with local UCU president Vicky Blake speaking and toured all the picket lines on the first day of the strike.

UCU has declared this a dispute of national significance, because if this is not stopped at Leeds, then similar practices could rapidly spread across the whole of the university sector.

This is the latest struggle in the battle against the marketisation of education, and the Socialist Party and Socialist Students will be backing UCU members locally 100%. We'll be back on the picket lines for the remaining days of this strike and cotinue campaigning against this attack on university staff.