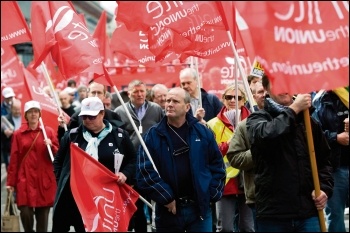 In driving rain, over 300 steelworkers, their families, trade unionists and supporters from the wider community, marched through Motherwell from the Dalzell plant to the site of the old Ravenscraig steelworks on 7 November.

They were joined by local public sector workers, also facing job cuts, and Glasgow shipyard workers. Marchers were applauded by shoppers and people in passing cars.

Socialist Party Scotland has been campaigning across the West of Scotland demanding the Scottish National Party (SNP) government steps in to nationalise the plants.

Over 1,500 people have signed our petition. 45 copies of the Socialist were sold on the demo, making a total of 500 in the last fortnight.

Ross Clark, Community trade union convenor for the affected plants, spoke at the rally and to the Socialist: "We cannot allow what happened with Ravenscraig to happen here. People have united here on this demonstration and we need to push the taskforce and both governments to consider all options."

Labour MSP John Pentland called for nationalisation and public ownership of the plants to be considered, linked to guarantees by the Scottish government of procurement contracts. John raised the example of the SNP government's state intervention to save Prestwick airport.

This demand, if taken up by the trade unions in a mass campaign, could put serious pressure on the Scottish government - which has yet to find its preferred option of a private buyer, but has not ruled out nationalisation.

We have also raised that there needs to be an emergency trade union response bringing together all industry shop stewards in a national meeting to formulate a strategy of mass action including discussion of tactics of industrial action and occupations to defend jobs and workplaces.

Steelworkers are already on short time working and there is limited time. But still time exists for the trade union to mobilise mass support from the working class to bring pressure on the Scottish government and the remaining taskforce summits. Action should be linked with workers and the community in Scunthorpe.