Three in five young women aged 13 to 21 have faced some kind of sexual harassment at school or college in the last year. Tokenism at the top has gone together with retaining practices like sexist school and workplace dress codes.

Jeremy Corbyn received a fantastic reception from 2,500 people at an open air rally in Nottingham.

This year's Pride march in Nottingham on 30 July was a far cry from the corporate-sponsored 'respectability politics' of integration into the capitalist establishment.

'Tinned Goods' is a new drama set in the summer of 1984 during the lead-up to the largest women's march ever to take place on British soil. It is visiting theatres around Britain from 11 March.

A facility called Oakdene, used by adults with learning difficulties, is in need of refurbishment. But the council is considering finding a new place for them by closing an elderly care home and moving the facility there instead!

Short reports on some of the latest trade union struggles. College and uni lecturers lead the fightback. 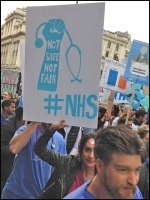 20,000 doctors and health workers marched in London against Tory health secretary Jeremy Hunt's vicious attacks on pay and conditions on 17 October. The marchers were angry and determined. Thousands more demonstrated in Nottingham and Belfast

List of upcoming protests against changes to junior doctors' contracts.

Nottingham Socialist Students had a good response at the first freshers fair of the year.

As people live longer, more and more are likely to need care services when they get older, writes Jean Thorpe, Nottingham Socialist Party.