The Socialist warned that a privatised rail service would fail, be run for profit, fares would increase, safety compromised and investment fall. 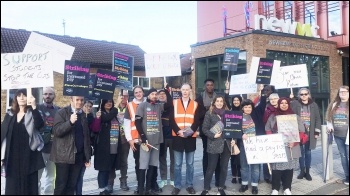 Bus drivers at Bluestar in Southampton were out in force at Totton and Eastleigh bus depots on 18 June, angry at their pay and working conditions, writes Southampton Socialist Party.