Since 2010 spending on social care has fallen by 12% while the number of people in need of support has risen by 14%.

These figures come from the annual report from the Association of Directors of Adult Social Services (Adass) and show devastating cuts that local authorities have made in their adult social care budgets.

A 26% cut in department budgets, equal to £3.53 billion over the last four years has, claims Adass, made social care services 'unsustainable'.

The articles below show the impact such cutbacks have on service users and workers. 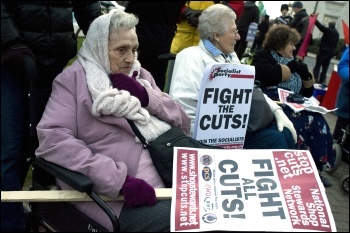 I'm a recently retired worker now living in a housing association retirement complex; 'retirement living with care and compassion', as they call it. But while we pay 'service' charge increases, a lack of funding from government means one part-time warden covering several housing sites. Previously, a full-time warden was on site.

Services are suffering. A gentleman aged 100 fell in his flat and could not get to pull the emergency cord. He was discovered by his neighbour three days later on the floor.

A resident aged 60 was discovered by his friend on the floor. She called for help from a sub-contract part-time cleaner who was on site. The cleaner rang the alarm number and was told: "Can you turn him over and see if he is dead?" She refused and was told to ring for an ambulance - he was dead before they arrived.

The property's landlord replied to our concern by saying they were sorry staff weren't available but: "We would expect residents to directly contact emergency services by telephone or pulling on your pull cord and not to wait for a member of staff to attend site." This resident was single and lived on his own. How could he ring for an ambulance?

An 80 year old resident was told the repairs service no longer changed bulbs in fixed lights in bathrooms or kitchens so she should do it herself.

Millions of people who saw the BBC news item where an elderly lady was abused and beaten in a home will wonder whether that is what they have to look forward to as the 1960s youth generation approaches old age.

Now at the end of our working lives, the government denies us the most basic services. But we keep contributing through an increased charge for a pathetic service. We've no choice, we can't 'opt out' of this service.

There's no respect, no acknowledgement of the sacrifices most of us made in our working lives. With malicious government cutbacks to services, these are the real issues we should address. This greedy government needs to be kicked out. Who cares? We have to - now!

Over 60% of the people aged 50-plus surveyed by charity Age UK think the government treats older people badly, mainly citing the poor standard of social care. 70% of 50-64 year olds are concerned that older people receiving care services are not treated with dignity and respect.

Age UK calls for more investment across a range of services. When they reported an "epidemic of loneliness among the elderly" Health Minister Jeremy Hunt called this a "source of national shame". Government care minister Norman Lamb said the elderly's plight reflected "Britain's neglectful society".

So if the elderly are isolated in their homes it is not due to transport costs, lack of council resources, cuts to the care system, the closure of lunch clubs and day centres, nor even to time limits on home visits and meals-on-wheels services (which put pressure on staff and makes personal interaction almost impossible). No - it's all the fault of the uncaring, indolent and selfish British public.

But these same ministers approve measures that will make life intolerable for the most disadvantaged and force many to stay in the confines of their home or potentially into residential care.

They have decided to stop the Independent Living Fund which helps around 18,000 severely disabled people lead a more normal life.

This move was successfully blocked in a Court of Appeal last year. But no expense is spared in pressing ahead with this mean policy.

Those food bank deniers in government would have us believe the crisis in care is not about money but morality and social conscience. Their class can easily afford private nursing homes, paid carers, nannies and employed 'companions'.

What's next in their game of shaming and blaming working class families - a public rendition of "There's not enough love in the world"?

On 5 July, the 66th anniversary of the founding of the national health service, 1,000 local people, community activists and trade unionists marched through Tower Hamlets and Hackney in east London. We were there to fight NHS cuts, save doctors' surgeries and make sure the NHS survives and prospers.

We were chanting slogans and handing out leaflets to drivers and pedestrians who wished us good luck and promised total opposition to privatisation. Many local people brought out all the family to show solidarity.

Local GPs opposed the cuts, along with hospital workers, trade unionists and trades councils from local boroughs and Waltham Forest, while flags from Unite the Union were noticeable.

The local Labour MP for Bethnal Green spoke against the cuts in doctors' surgeries. Unfortunately Labour MPs could say far less about opposing other attacks from the Con-Dems, such as the £77 million cuts at the local Barts Health Trust. This trust is saddled with huge Private Finance Initiative (PFI) debts attached to the old Royal London hospital.

How will big business-friendly Labour fight this assault on NHS workers and patients when they won't cancel PFI debt?

Socialists welcome this protest but will keep pushing for an all-out battle by the working class, fighting for a socialist alternative that will oppose the big business interests that threaten the NHS.