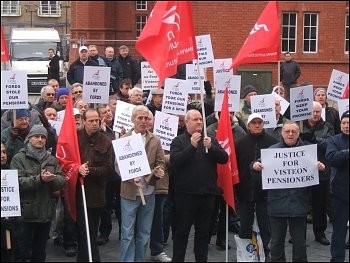 Socialist Party members participated in the occupations and other solidarity actions, as well as the ensuing pensions' battle.

This struggle was at the start of the Great Recession - following the capitalist financial crash triggered by the Lehman Brothers banking collapse.

The hard-nosed Visteon bosses thought that they could just summarily close 'their' factories, throwing workers out onto the streets, with measly compensation.

Unfortunately the factories have not been saved. If the workers' suggestion that they be nationalised (by the then Labour government) and kept open through alternative production had been adopted, they could have been.

Some of those who were made redundant may get jobs later - although this is a remote prospect for many. It is also likely that these jobs will be much lower paid.

There is also the unresolved issue of the workers' pension rights. It is not ruled out that the bosses could try to renege on the pensions. This must be met with firm opposition from the trade unions.

These workers have now set a benchmark for all similar struggles in Britain. They have 'learned to speak French' - ie adopting the militancy of the French workers.