The issue of allowing US corporations access to the NHS and the affect of that on the cost of drugs has featured during the election campaign.

The NHS crisis has reached horrifying new levels. Over 300 NHS nurses have died by suicide in seven years. In 2014, one nurse a week took their own lives.

The NHS has been priced out of buying a life-saving drug by pharmaceutical company Vertex. The cystic fibrosis drug, which can extend the life of children, costs £105,000 a year - a price which the NHS says is "unaffordable".

NHS faces drug price hikes: Instead of subsidising their profits with tax breaks, they should be nationalised under democratic workers' control and management

Over 25,000 people have been infected with contaminated blood products the NHS bought from profit-making pharmaceutical companies. Nearly 3,000 have died so far

The Tories make dangerous claims like 'we're all living longer' and 'people are demanding more treatment'. Of course people want the most up-to-date and effective treatment, it's 2018.

The important national demo in London on Saturday 4th March to save the NHS needs to be a springboard to build a massive movement that can defeat the government's attempt to finish it.

Another drugs company could face punishment after an apparent 12,000% price hike. Nationalise big pharma under democratic workers' control and management!

Nationalise the drugs companies! The unrestrained profiteering of drugs companies means the NHS could start rejecting groundbreaking treatments for cancer and dementia as "unaffordable".

It's one world for the super-rich, and another one for the rest of us. The Sunday Times published its annual Rich List on 24 April. 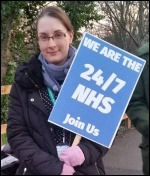 Pfizer has announced the closure of a Cambridge research institute. The world's biggest pharmaceutical company will axe 120 scientists' and support workers' jobs.