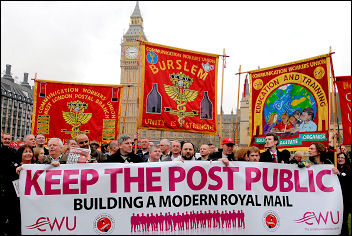 Around 350 people marched through Birmingham city centre on 29 January as the Communication Workers Union's 'Keep the Post Public' campaign continued its journey around the country.

Although the turnout was disappointing considering the city's size and location, it must be remembered that large demonstrations against the cuts were taking place elsewhere, not to mention the student protests in Manchester and London.

It provided a very loud and lively spectacle for Saturday shoppers, led as they were by a Sikh drumming band whilst blowing whistles and chanting: "Royal Mail Not For Sale" and "Hey, Ho David Cameron's got to go".

The marchers were made up of postal workers and their families, anti-cuts groups, trade unionists and students and it was clear that the protest was not just about the proposed sell-off of Royal Mail but also the Coalition's plans to make ordinary people pay for the bankers' crisis with cuts to jobs, pay and services.

Billy alluded to the situation unfolding in Egypt when he referred to a quote from Harold MacMillan. When he was asked what a politician should be most aware of, MacMillan replied: ''events dear boy, events''.

The point being, in this case, that although the Postal Services Bill, which will allow Royal Mail to be sold, passed its third reading and has now been sent to the House of Lords for ratification, this is not the end of the fight to keep Royal Mail as a publicly owned service.

Events can swiftly overcome politics and politicians. Billy continued, citing the three previous occasions where politicians have sought to privatise Royal Mail, beginning in 1994 when Michael Heseltine was defeated even after the Lords had ratified the proposal, due in large part to public opposition.

Then, in 2005, the then chairman of Royal Mail Alan Leighton wanted to privatise Royal Mail, even going so far as to issue the workers with 'phoney' shares.

But Leighton slipped out quietly when he saw the scale of what he proposed and the determination of the CWU to stop it. Lastly, Lord Mandelson in 2008 attempted 'part' privatisation of Royal Mail, which was also defeated.

Although it must be said that this was partly down to the 'credit crunch' in addition to the 'Keep the Post Public' campaign at that time. Privatisation, continued Billy, will lead to the closure of thousands more post offices in addition to the 9,000 closed under New Labour as profit becomes the sole motivator for a privatised Royal Mail and it seeks cheaper outlets for its services.

Indeed, one third of the post office network's business (over £300 million) comes from Royal Mail and to allow a privatised Royal Mail to seek cheaper outlets will sound the death knell for post offices around the country, mainly in rural areas where they provide a vital public service.

In addition, Billy said, privatisation will mean the end of the universal service where it costs the same to send mail to your next door neighbour as it does to an address hundreds of miles away, six days a week.

Deliveries will be curtailed to three days a week and only to the most 'profitable' parts of the country. Rural areas will lose out.

If you run a business and need mail delivered every day, you'll have to pay extra. And tens of thousands of workers will be thrown onto the dole.

Also, prices will rocket as shown in Holland and Germany where mail costs twice as much to send as it does here. And the two companies expected to bid for Royal Mail are Dutch (TNT) and German (Deutsche Post).

But Billy reiterated the resolve of the CWU to fight every step of the way against this proposed privatisation and against the Coalition's spending cuts.

Dave Ward echoed Billy's pledge that the fight against privatisation will not cease as, even if it becomes law, Royal Mail will still be publicly owned the following day and so the fight will carry on.

Dave also addressed the propaganda being peddled by the government that Royal Mail is a financial 'basket case'. Profits of over £700 million in the last two years give the lie to this.

Dave reminded everyone that a modernisation programme, agreed by Royal Mail and the CWU, is being implemented, so why should a private company be allowed to come in and 'cherry pick' the fruits of that? Dave also mentioned the government's opposition to the proposed 'Post Bank', which would provide a vital service to rural areas as well as people who find it difficult to open a bank account, in addition to providing vital funding to post offices through the increased use of them.

Dave then brought up the vital issue of regulation in the UK postal service, specifically the way in which it is skewed towards private companies, resulting in the perverse situation in which the UK taxpayer (ie Royal Mail) subsidises the competition's profits by £150 million a year.

The cost to the government of increasing Royal Mail's funding and profitability is zero, he said. Level the playing field regarding competition.

Finally, Dave brought up the issue of the pension fund deficit, currently standing at £8 billion. This is the issue with which the Coalition continually beat people around the head with to persuade the public of the need for Royal Mail to be sold off.

The government will agree to fund the deficit in exchange for privatisation. Just as New Labour said in 2008.

But the real reason for the proposal to privatise Royal Mail is so the government can appropriate the £26 billion in assets that the fund holds. They can then pay off the pension deficit on the 'never-never' while getting a chunk of money equivalent to one sixth of the public spending deficit.

Dave concluded by saying that privatisation is not in the interests of the people, neither communities, business and certainly not the union members. That's why the fight against this government's plans to sell off Royal Mail and decimate the lives of tens of thousands of people and the service they provide, will be fought every step of the way. Up to, and including, strike action.

Keep the Post Public will be organising the next march and rally on 19 February in Beeston, Nottingham. Assemble from 1pm at the Mail Centre, Padge Road, Beeston. March to commence at 2pm.