Tory MPs and members knew that Boris Johnson's entire career as a journalist and politician was littered with lies - that's why they selected him, to win a general election based on 'levelling up' lies.

Editorial of the Socialist issue 1164: Every day Boris Johnson and his government are more and more mired in scandal. As we go to press the findings of the inquiry into 'Partygate' revelations have not yet been made public and are now being

Nationalise private health and big pharma: Private hospitals are set to receive up to £525 million of public money in a deal negotiated by the Tory Health and Social Care Secretary. 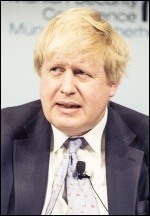 For democratic workers' control of Covid safety: The self-isolation period after a positive Covid test has been reduced from seven days to five, with negative lateral flow tests on days five and six

Boscombe is supposedly not fertile ground for socialist values, but at our first Bournemouth Socialist Party campaign stall of the year on 15 January, we talked to many disaffected people on a range of topics - including union rights, issues effecting LGBTQ+ people, housing and homelessness.

The richest 1% of households were getting richer even before the pandemic, taking their average wealth to £3.66 million. The wealth gap has widened further since.


This year is set to inflict more pain on working-class people as rising costs outstrip incomes, meaning real-terms pay cuts. The average pay deal last year was worth just 2%, and a survey of employers found they were only planning 2.5% raises this year.

There is a shortage of Covid tests. You may have failed to book a pack of seven rapid lateral flow tests (LFTs), and people are struggling to books slots at PCR test centres. 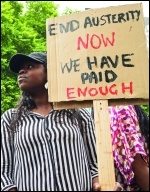 As local authorities begin discussing their 2022-23 spending, the scale of cuts being prepared can be seen

The Tories have added further amendments to the controversial Police, Crime Sentencing and Courts Bill in an attempt to restrict people's ability to protest

Newham resists cuts: Newham Resists has agreed to campaign for a no-cuts, needs budget to show there is an alternative to the Labour council passing on Tory austerity. Newham Resists is a new coalition.

The 'levelling up' fantasy is being exposed as a farce, and fearful Tory MPs are in revolt. Now is the time, when the Tories are so weak, divided and floundering, for workers to get organised, and for the trade union leaders to go on the offensive