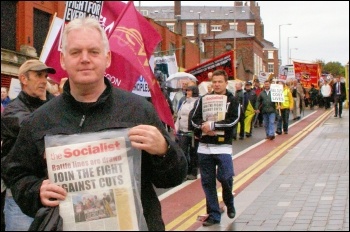 On Sunday 19 September, despite pouring rain, 4,000 trade unionists (according to the Liverpool Echo) rallied in Liverpool to lobby the Liberal Democrat party conference.

The Lib-Dems are part of the Tory-led coalition government that is axing thousands of public sector workers' jobs and pushing through billions of pounds of cuts in essential public services in an attempt to make working people pay for the economic crisis.

The Merseyside Public Sector Alliance had originally planned a demo on the Saturday but when the regional TUC organised a static demo for the Sunday the Alliance switched and changed its demo to be a feeder march to the Sunday rally.

From the assembly point at Salthouse Dock, I watched as the march joined the static rally to terrific applause, doubling the size of the rally.

Led by the banners of the teaching unions NUT, NASUWT and even ATL, there were significant contingents from PCS and UNISON plus several local groups, including the Liverpool Joint Trade Union Committee.

Banners and flags from all the unions mingled as the rally gathered on the cobbles, including from UNITE, RMT, CWU and many others.

For 'security reasons' the rally was not allowed in the immediate vicinity of the conference but there was no shortage of Lib-Dem delegates to discuss with.

One young delegate I gave a leaflet to said he had been a Labour supporter but was repelled by the Labour government's approach to civil liberties issues and joined the Lib-Dems after the general election.

He totally agreed that there was now no difference between them and the Tories and that big business 'ruled the roost', quoting the deal HMRC have done to write off £6 billion of tax which Vodafone should have paid.

This was ironic given that Lib-Dem Treasury chief secretary Danny Alexander, that same afternoon, was promising Lib-Dem delegates that the government was going to get tough with tax evaders.

He promised that up to £7 billion could be saved - this when the PCS estimates that £125 billion a year disappears through tax avoidance and evasion!

This conversation, and many others which trade unionists had, showed the point of lobbying the Lib-Dems as the weaker coalition partner.

This was a good start for the labour and trade union movement in the north west, and drew a good response from the activist layer - union stewards, branch officials, trades council delegates etc.

The trade union officialdom has learnt one lesson at least from the French, Spanish and Greek workers - make sure everyone has a flag! Now we need them to wake up to the other lessons - a national demo and one-day general strike in the public sector!