It's one world for the bosses and another for the rest of us. Queen backs EU; pensioners forced to work

While it's unlikely one of us would be allowed on the road at 97 after such recklessness, the Duke of Edinburgh needn't worry about the consequences

The cost of Harry and Meghan's marriage will be 110 times that of the average couple - 1,785 times including security - according to estimates by wedding planner Bridebook.

It's one world for the super-rich, and another one for the rest of us. Royal baby's gold rattle versus millions in childhood poverty; disused garage fetches record price and Sadiq Khan's landlord links.

Not a month goes by without enduring the fawning tones of the British establishment and its media supporters spewing out gushing sentimentalities about the royal family. There's no escape, writes Tracy Edwards.

A royal debate in Lincoln

On the Saturday of the Jubilee weekend, while the BBC might have us believe that everyone was hanging up bunting or baking cupcakes for street parties, members of Lincolnshire Socialist Party held a stall with "abolish the monarchy" proudly emblazoned on the front, writes Dave Tompkins.

The government will be hoping that the Jubilee flotilla of 1,000 ships on the river Thames will serve as a useful distraction while it pushes through more swingeing cuts... 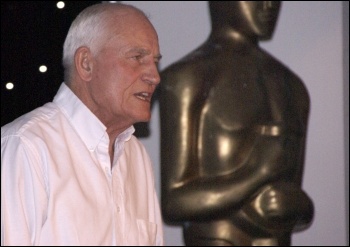 Tony Mulhearn speaking at a public meeting organised by Liverpool Trades Council on Thursday 10 February, to debate the way forward against the cuts, photo Harry Smith

Review: The monarchy - reserve weapon of the ruling class?

BBC Radio 4's The Moral Maze programme recently dealt with the monarchy against a background of the circus surrounding the wedding of Wills and Kate...

The Roman Emperors dealt with economic crisis with a policy of 'bread and circuses'. The Con-Dems are determined to leave out the bread and just give us the circuses. Witness the media torrent of sickly...