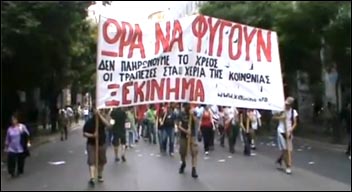 Greece's deepening sovereign debt crisis is threatening to destroy the eurozone and trigger a worldwide banking collapse, according to the International Monetary Fund.

But as the political representatives of capitalism attempt to make the Greek working class pay for the crisis though another savage austerity programme the workers are fighting back, as Niall Mulholland reports.

The inspiring Greek general strike and 250,000-strong demonstration outside the parliament buildings on 15 June showed the fierce opposition of millions of workers to yet more savage austerity cuts.

The terms of a second bailout include a 10% cut in public spending and a huge 33% reduction in public sector wages. It will mean the sacking of one-fifth of Greece's public sector workforce and "the biggest, fastest privatisation programme, relative to national output, ever mounted", according to Will Hutton (Observer 19 July).

Greece will have to pay at least €100 billion of debt over three years - a staggering 40% of GDP.

No wonder there is popular fury against Greek politicians and the 'troika' of the European Union (EU), the European Central Bank (ECB) and the International Monetary Fund (IMF). "Only dictators would take the measures this government want to pass," commented a lawyer in Athens last week to the Guardian newspaper. 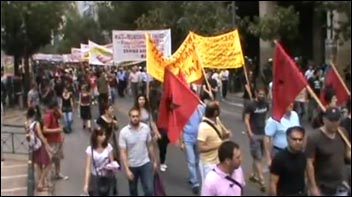 Greek workers were already hit hard by tax rises, pay and pension cuts and wide-ranging public sector cutbacks, in return for a £95 billion bailout agreed last year by the Pasok government and EU, ECB and IMF.

The brutal austerity policies only depressed the economy further, with unemployment ballooning. 50,000 businesses went bankrupt last year. Industrial production fell by 20% and is due to decline by another 12%.

These sorts of figures are normally associated with the 1930s Great Depression or the catastrophic consequences of capitalist restoration in the former Soviet Union. Greece is clearly unable to repay its debts. Yet prime minister Papandreou's response is yet more cuts and huge privatisations of electricity, water, railways, and the docks.

Even if a second bailout is achieved, which could be as large as the original, many economists believe it will merely delay an inevitable default.

With so much Greek debt held by European financial institutions, this could lead to Europe's 'Lehman Brothers' moment', a reference to the spectacular collapse of the debt-laden investment bank in 2008, which triggered the first financial crisis.

A default would place enormous losses on the lending banks in Europe, hitting French and German banks in particular, as well as financial institutions in Asia and the Middle East. A default by Greece - bankruptcy by any other name - would trigger a new banking crisis, likely as deep as 2008. It could lead to the breakup of the eurozone, with the emergence of two or more currency 'divisions' or even complete collapse. Even if the currency manages to stagger on for the moment, similar debt problems in Ireland, Portugal or Spain can yet trigger a new euro crisis.

Although outside the eurozone, Britain would not escape the consequences of country defaults and euro collapse. Three of the four "riskiest banks out of Europe's top 20" are British or ones with a substantial British involvement.

The British banking system has outstanding loans of more than four times its GDP, at £6.5 trillion. More than £1 trillion is lent in euros to European banks, governments and companies. 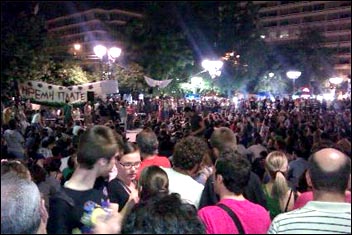 The economist Nouriel Roubini argues Greece has no choice but to default on its debts and to break from the euro single currency. This is echoed by Greek nationalists, who say Greece should quit the euro and devalue its currency, allowing exports to become cheaper and increasing the country's 'competitiveness'.

But leaving the euro on a capitalist basis is no solution for working people. It would lead to a hike in inflation and a further decline in living standards.

On its own, refusal to pay the debt will not solve the problems of the Greek working class. Therefore repudiating the debt must be linked to the call for the democratic, public ownership and control of the banks and the major planks of the economy, planned and managed by working people.

A socialist economy and a socialist Europe would see living standards of working people and their families transformed.

Since the outbreak of the European debt crisis, the capitalist establishment has not provided a viable solution in Greece, Ireland, Portugal and Spain or indeed across the continent. The depth and scale of the crisis - not an 'episodic downturn' but a deep, protracted crisis of world capitalism - is reflected in the increasingly bitter splits opening up in heart of the EU.

Chancellor Merkel is under domestic pressure in Germany, where the proposal to give more "taxpayers' money" for another Greek bailout is "deeply unpopular". She called for banks and financial institutions that lent heavily to Greece to share some of the pain by accepting "write downs" on their loans.

But Merkel backed down in the face of strong French and ECB opposition. They argued that Germany's demands, raising questions about who will bear what losses, would stop banks lending to one another in the global markets, triggering another Lehmans-style financial disaster.

Realising that resistance to his planned new austerity cuts will not go away, prime minister George Papandreou offered to stand down on the day of the general strike and to form a 'coalition' government with the opposition, right wing New Democracy (ND). But the ND refused Pasok's toxic offer, confident they can win the next elections (they are now 4% ahead in the polls).

Papandreou then announced a cabinet reshuffle followed by a confidence vote in the parliament, hoping to contain Greece's explosive situation.

But no matter how much the cabinet is reshuffled or how many coalitions from the establishment parties are established or if new elections bring the ND back to government, all these political forces will continue with more anti-working class policies.

In the teeth of such a profound crisis of capitalism, the Greek and European workers' movement needs a bold alternative. The huge demonstrations in Athens of the 'Engraged' youth and workers - inspired by the revolutions in north Africa and the Middle East and the Spanish 'Indignados' - revealed that big sections of the population are alienated from all politicians and the ruling establishment.

Many are sceptical and even hostile towards the leaders of the unions and Left organisations, who have no real alternative to the policy of bailouts and austerity measures.

While the one-day strike on 15 June was a magnificent display of the power of the organised working class, it is clear that more militant mass action is needed to stop the cuts.

On 20 June, workers at the state-owned electricity company began a series of 48-hour strikes against privatisation plans and against the new 'intermediate memorandum' made between the Greek government and the troika, as part of the process of moving towards a new bailout and austerity cuts.

The explosive social situation and the developing tendency for a merger of the Engraged protesters with striking workers put pressure on the Greek TUC to call a 48-hour general strike in the run-up to a parliament vote on the new memorandum (expected in late June).

This is a very important development, as it is nearly 20 years since the Greek TUC last called a 48-hour general strike.

But faced with such huge attacks, even this is not enough. The workers' movement needs to organise a rolling programme of 48-hour general strikes and longer, if necessary, with rank and file democratic control, linking up with the movement of youth on the streets, on a local, regional and national level.

This can halt the plans of Pasok and the troika and also provide the basis for a new government based on the interests of workers, the unemployed, poor and youth.