Stop corporate plunder of the energy and power sector in Bangladesh 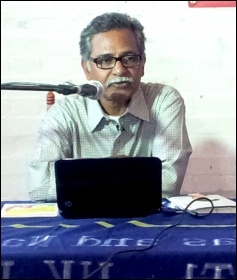 A packed meeting in Tower Hamlets heard the secretary of the Committee to Protect Oil Gas and Natural Resources in Bangladesh, professor Anu Mohammad, who was visiting the UK, condemn the corporate plunder of Bangladesh by companies like the UK based Global Coal Management Resources (GCM). Despite huge protests and three deaths (reported in the Socialist, 8 December 2010 ), GCM is still pressing ahead with a massive open-cast coal mining operation in Phulbari, north-west Bangladesh, which will displace up to 200,000 people, destroy over 14,660 acres of agricultural land and devastate the water resources of another 220,000 people. 94% of the revenue generated by the planned mine will be taken by GCM, campaigners say, leaving only 6% for the government. It is daylight robbery. 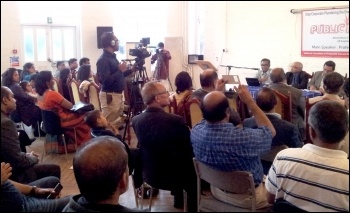 Public meeting of the Committee to protect oil gas and mineral resources in Bangladesh, UK Branch, photo by Socialist Party   (Click to enlarge)

Despite brief attempts to drown out his speech by rowdy Bangladeshi government supporters who had taken an adjoining room, Anu Mohammad clearly explained the role of the multinational corporations in the ruination of Bangladesh, a fertile country rich in water and mineral wealth. In the mid-1990s, the World Bank promoted the privatisation of gas, oil and other natural resources in Bangladesh with the promise that it would bring 'cheap gas and save huge amounts of money for the public exchequer'.

But 'that is the opposite of the case', Anu Mohammad explained. Oil and gas companies like ConcoPhillips and Chevron moved in and now the cost of production is anything from 10 to 30 times more than it was in the hands of Petrobangla, the government-owned national oil company of Bangladesh. Anu Mohammad argued that while it costs 1 billion taka to drill an oil well, the cost in the hands of Unocal Bangladesh, bought by Chevron in 2005, was 15 billion. One energy project estimated at 20 billion taka cost 180 billion.

'Sustainable power solutions are not possible with these greedy corporations', professor Mohammad stated, while renewable energy 'has huge potential and a real future'. Meanwhile 5 billion in US dollars (387 billion Bangladesh taka) is owed by US and Canadian corporations in unpaid compensation for accidents and Chevron effectively pays 'nothing in tax but claims to be the number one taxpayer'. Every penny Chevron pays in tax is refunded by the government through Petrobangla. 'Who is running the country?' professor Mohammad asked.

But the 'spirit of resistance is still very active'. Three activists were killed during a mass movement which forced the government to completely repudiate the entire open-cast coal mining operation in Phulbari in 2006, a promise it appears not to be keeping. Last year GCM's chief executive, Gary Lye, was forced to cancel his plans to visit Phulbari by the District Commissioner and local police due to the 'volatile situation prevailed at Dinajpur's Phulbari' according to Bangladesh's bdnews24.com. There were all-day protests against his visit by locals 'carrying sticks'. 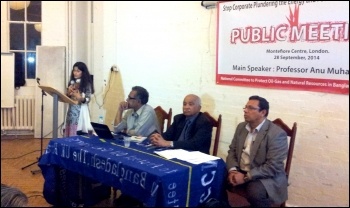 I emphasised the Socialist Party's demand for public ownership of the UK energy industry - and this would of course include GCM. In addition, the Socialist Party demands that compensation should only be given to the share owners in cases of genuine need. I called for an ecologically-minded, democratically drawn up socialist plan of production to end the madness of capitalist exploitation of the planet and the dangerous global warming that has resulted. This would end the profit-motivated depredation of Bangladesh by companies like GCM.

The Trade Unionist and Socialist Coalition, of which the Socialist Party is part, is committed to such a programme and I invited the UK branch of the Committee to Protect Oil Gas and Natural Resources in Bangladesh to send representatives to the local TUSC committees in preparation for the general election in Britain next year.

Five copies of the Socialist were bought and one copy of Planning for the Planet by Pete Dickenson.

The website of the UK Branch of the Committee to Protect Oil-Gas-Mineral Resources in Bangladesh is: www.protectbdresources.org.uk and the Phulbari Solidarity Group website is www.PhulbariSolidarityGroup.wordpress.com

This version of this article was first posted on the Socialist Party website on 29 September 2014 and may vary slightly from the version subsequently printed in The Socialist.