The Tories have added further amendments to the controversial Police, Crime Sentencing and Courts Bill in an attempt to restrict people's ability to protest

On 25 November, bloated CEOs, senior managers and their hangers-on in the social housing industry attended their annual shindig

I attended Sheffield's March for Midwives protest on 21 November in solidarity with my sister, a midwife at Barnsley Hospital, and her colleagues

Over 50 taxi drivers protested in Leeds on 10 November, against proposals by Network Rail and West Yorkshire combined authority to relocate the hackney carriage taxi rank to a space beneath the station

Chanting "down, down, Al-Burhan", over 100 people from Leeds' Sudanese community rallied on 13 November in support of the mass protests taking place on the same day in Sudan 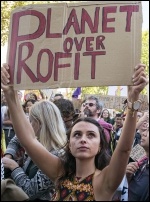 Over 70 trade unionists, arts workers and community campaigners turned out for the second protest in defence of Stratford Circus arts centre on 16 October

The Socialist Party leaflet on the protest about Texas abortion rights in central London on 2 October read: "Defend the right to choose, when or whether to have children".

On Saturday 12 September, I spotted in the Bromsgrove Advertiser that a Nurses United protest was taking place in Bromsgrove at Tory Health Minister Sajid Javid's party office

Warrior Carers protested outside West Sussex County Hall on 15 September. We were protesting about the unfair client contribution, also known as the 'disability tax'.

On 19 September, 40 people protested for the legal recognition of non-binary people, and to end trans discrimination under the current Gender Recognition Act

Equity's protest to save theatre jobs at Stratford Circus arts centre was a big success. Around 50 joined a determined and positive rally on Saturday 28 August in Newham's historic Theatre Square.

Leicester is in danger of being named the sweatshop capital of the UK. BooHoo hit the headlines last year for using Leicester suppliers that paid their workers around £4 an hour, way below the current

The organisers of London's Pride event, postponed from July to September, have announced it will be cancelled this year, citing concerns over the ongoing pandemic.