"I shouldn't have to justify why my life is worth the same as that of my white neighbour," summed up a speaker to applause from the crowd of around 100 protesters. We were gathered for one of three concurrent Black Lives Matter demonstrations taking place across London on 6 August.

Over 60 people, mostly from the local black community, squeezed into a public meeting on 27 July to support and discuss the Black Lives Matter movement in the United States. The leading guest speaker was Ryan Watson, an activist in Black Lives Matter in Chicago, who is also a member of Socialist Alternative - co-thinkers of the England and Wales Socialist Party.

Crowds took to the streets of Huntingdon on 16 July to march in solidarity with the Polish community and embrace the diverse culture of the town.

A storm of proud fury swept through Brixton, south London on 9 and 10 July as hundreds marched against police racism. 3,000 followed in Manchester on 11 July. Other cities plan to join them.

In response to a threat from fascist group South Coast Resistance to march under the slogan 'Refugees not Welcome Here', over a thousand counter demonstrators arrived at the assembly point by the Bargate in Southampton on 2 July, without a fascist in sight. 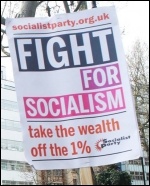