The establishment media has already decided that reactionary pro-austerity politicians are the only exit voices they will feature. They completely ignore the millions of trade unionists and young people who, like the Trade Unionist and Socialist Coalition, oppose the EU from a completely different standpoint. 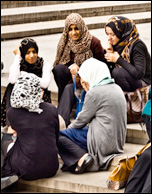 David Cameron recently attacked Muslim women. He apparently said the "traditional submissiveness of Muslim women" is a cause of terrorism. His answer was English language training - which his government has cut the funding for.

The shocking attacks on scores of women in Cologne, where up to 1,000 North African or 'Arab-looking' men were said to be on the rampage, brought the inevitable baying from the far right and a backlash from the establishment media and politicians.

Confronting the far right in Derby

Derby Socialist Party members arrived to do our weekly campaign stall on 28 November when we noticed around ten supporters of the far-right group Britain First with their own stall nearby.

It's one world for the super-rich, and another one for the rest of us. Richest 10% responsible for half of 'lifestyle' CO2 emissions; the Sun lies about terror routes.

Political thriller Homeland was targeted by graffiti artists hired to help with set dressing, subversively daubing "Homeland is racist" in Arabic on the walls.