Book Review: A revolutionary whose ideas couldn't be killed: Eighty years after his assassination, the Committee for a Workers' International (CWI) has published a collection of ten essays on the life and ideas of Leon Trotsky

TV review: 13th: I was encouraged to watch this documentary by my daughter who has recently been motivated to go to her first protest, the Black Lives Matter demos against racism.

I was astounded as to the extent of the government's PPE failures and how NHS staff are being put at risk, writes Barbara Clare, Stevenage Socialist Party.

On 5 October two years ago, the #MeToo movement exploded - first on social media, then spreading to protests on the streets and in workplaces - becoming a global phenomenon.

Tombland is the latest novel in the Shardlake series by CJ Sansom. It is a murder mystery set in the 16th century. There are no spoilers in this review about who the murderer was.

Women of Aktion by the Bent Architect Theatre Company tells the story of the women and men whose heroic actions brought World War One to an end. 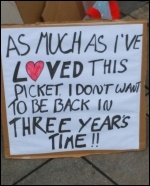 With a storm of protest on social media overnight and remarkable scenes on angry picket lines and massive protests, University and College Union members around the country have ensured no backtracking in their struggle to defend their pensions.