Reading, 26.5.21: Standing with the #Sparks blockading #AWE in fight against de-skilling #No2ESO

Rank-and-file construction electricians have launched a struggle against what they see as 'multi-skilling' by bosses at the massive Hinkley Point site in Somerset to build a nuclear power station, estimated to cost £22.5 billion. 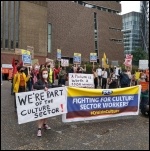 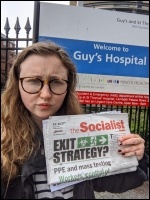 In the space of one week, the trade union movement is marking two of its most important annual days - International Workers' Memorial Day on 28 April, and May Day on 1 May

General union Unite's 2019 rules conference made some important steps forward but missed opportunities to develop member participation. It also passed amendments that could be dangerous to the left in the future.

The closure of the Bridgend engine plant is to be closed after nearly 40 years of production.

The Socialist Party's North West region held a very successful conference on Saturday 2 February, with nearly 50 members attending from across the region

34 delegates attended in the recent East Midlands Socialist Party conference in Nottingham to discuss the political situation and prospects for building the party in 2019.