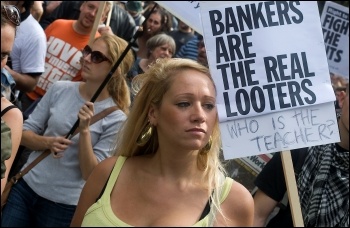 Bankers are the real looters: placard on Hackney - Tottenham demo after the riots , photo by Paul Mattsson

There is anger and disbelief in Dundee at the jailing of teenagers who were involved in joke Facebook pages 'organising riots', writes Matt Dobson, Socialist Party Scotland, Dundee. 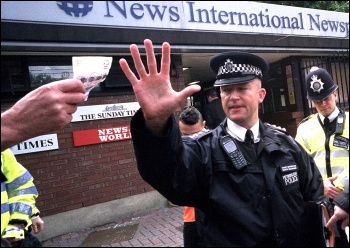 Cameron, the Murdoch empire and the police have been involved in a corrupt attempt to subvert the democratic rights of the British people, photo Paul Mattsson

"You must be the first mafia boss in history who didn't know he was running a criminal enterprise", said Labour MP Tom Watson to James Murdoch, chairman of News International

On 1 October the Scottish TUC's "People First" demonstration in Glasgow took place where, despite the horrendous weather, around 15,000 marched against the impact of the cuts 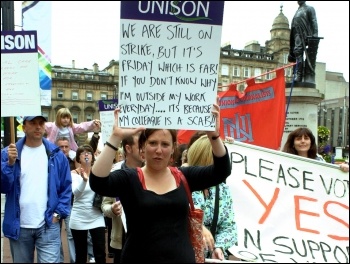 The mood among Unison members for strike action on being forced to pay more for a worse pension was driven home at the Scottish local government Unison conference on 2 September, writes a Glasgow Unison member.

Edinburgh University is the third university in Scotland to announce how much it will charge students from outside Scotland (Scottish students will continue to not pay fees) and has made itself the most expensive place in the UK to get a degree...

Nothing Left about the Scottish National Party 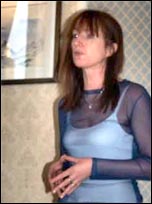 47) A similar battle is opening up in education - in the first instance in the university and college sector... 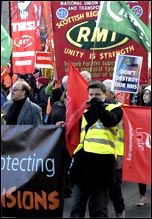 The Scottish National Party (SNP) has won the elections to the Scottish parliament by securing an unprecedented 69 MSPs, an increase of 23 on 2007, gaining an overall majority.
This is the biggest vote ever for the nationalists and was achieved largely due to the collapse of the votes of the Con-Dem parties in Scotland 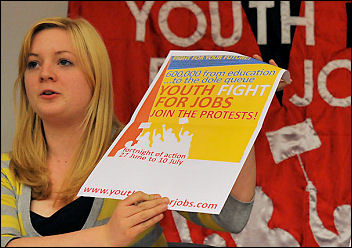 A few TUSC candidates explain why they arec standing. Over the last five years I've tried to turn the Greens left, but to no avail. They are obviously good about the environment but have no idea about the class struggle and don't want to get rid of capitalism,...

The elections for the Scottish parliament on 5 May are taking place at a time of unprecedented cuts, writes Philip Stott, Socialist Party Scotland.

Following a huge mobilisation of parents, teachers and the community the SNP-led Renfrewshire Council have been forced to back down over planned cuts to teachers jobs

"Let me say clearly to Renfrewshire Council. If you attempt to replace teachers with untrained staff then we will take our children out of school." These words, by Stephen Wright, chair of Renfrewshire... 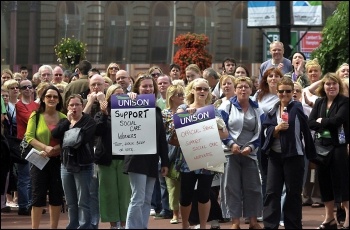 Just days before councils across Scotland meet to slash public services, the February meeting of Unison Scottish Council was presented with a paper for debate entitled The Public Sector Workforce Framework, writes A Scottish Unison member. 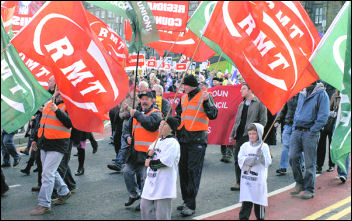 An historic step was taken on Saturday 29 January when the Scottish Anti-Cuts Alliance (SACA) was established at a conference in Glasgow. An edited version of this article appeared in issue 656 of The Socialist. 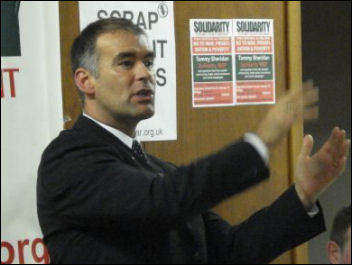 SCOTTISH SOCIALIST Tommy Sheridan was jailed for three years on 26 January having being found guilty on charges of perjury... 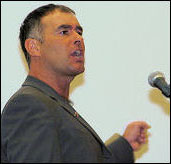 Statement from Socialist Party Scotland: "I have fought the power of News International all my political life and I make no apologies for taking on the might of Rupert Murdoch...