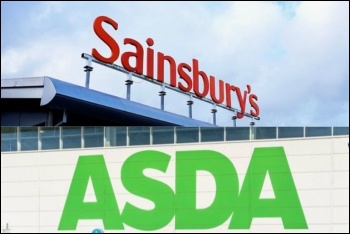 A decision which could massively shake up Britain's retail sector is due in April as the Competition and Markets Authority rules on whether or not to allow Asda and Sainsbury's - the second and third largest supermarkets - to merge.

But the regulator announced on 20 February that it was "likely to be difficult" for the chains to "address the concerns" which it has.

Retail workers, along with working-class people who shop in these stores, certainly have their own concerns. These include the potential for job losses, attacks on terms and conditions, as well as the predicted price rises that will follow the merger.

There are crucial issues at stake for Britain's largest retail trade union Usdaw, which represents workers on both sides of the deal. Usdaw organises workers in over half of Sainsbury's stores, as well as in its subsidiary Argos.

It also represents Asda workers in Northern Ireland. General unions Unite and GMB have members in Sainsbury's and Asda respectively.

Already, both Sainsbury's and Asda have carried out management restructures ahead of this deal, in both cases pushing roles and responsibilities onto lower-paid workers. There is a clear danger of a two-tier workforce being created.

If the deal goes ahead it seems that the two companies will maintain a degree of separation. But the unions should be proactive.

There should be joint meetings between Usdaw, Unite and GMB shop stewards representing the workforces to plan a joint campaign to increase wages, and fight to improve terms and conditions.

At minimum, the unions should campaign for all workers to receive the best conditions currently offered across the two stores - and no less than the pay and conditions demanded by Usdaw's 'Time for Better Pay' campaign.

This campaign fights for a £10-an-hour minimum wage and an end to zero-hour contracts. Whether a merger goes ahead or not, these demands must be fought for.

Merger off the cards?

However, it is looking increasingly likely that the merger could be rejected because of the potential concentration of too much of the retail market in one company, which would overtake Tesco in market share. Any merged company would control 2,800 stores.

Usdaw has rightly raised concerns over the Competition and Markets Authority's possible plans to order the closure or sale of stores - possibly up to 629 locations where competition is likely to be lessened.

If the deal does not go through then it seems likely that both companies will try to recoup the 'efficiencies' they expected to emerge from the deal by making further staff cuts, particularly if, as rumoured, Asda is fully or partially sold to a private equity firm.

Usdaw should start preparing to campaign to protect the jobs of workers in those stores and opposing their closure, particularly in the crisis on the high street.

But in its press releases the Usdaw leadership mistakenly makes arguments based on what it considers 'best for the market'.

Fundamentally, the logic of the market is driven by what generates the largest profits, whether by squeezing the wages, terms and conditions of staff, screwing over suppliers and customers, or merging and cutting to achieve 'efficiencies'.

The best way of protecting the jobs of retail workers is to campaign for bringing the big supermarket chains into public ownership, as part of a nationalised, democratic plan of production and distribution of goods and services.

Instead of imposing store closures and job losses where these are deemed surplus to requirements, there would be consultation with workers and the local community about what stores are needed, and any savings through efficiencies should be transferred into a reduction of the full-time working week - with no loss of pay - instead of into the pockets of shareholders.