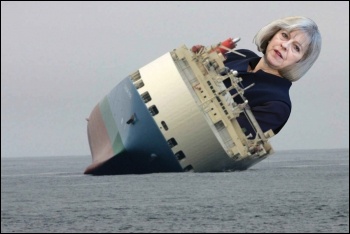 Theresa May's 2017 Tory conference speech will go down as one of the funniest - or the most humiliating - depending on where your political loyalties lie.

Britain's prime minister has gone from "strong and stable" to spluttering and stuttering in the space of a few short months. And it wasn't just an unfortunate bout of coughing, the crumbling scenery, or being handed a P45 that undermined May's attempt to resuscitate her ailing government.

Starting with an apology, this speech to the party faithful in Manchester was aimed at healing its deep splits. While never explicitly addressed from the platform, the gulf that exists within the Tories over Brexit took centre stage. Leadership rival Boris Johnson had to be ordered to stand up and applaud by fellow cabinet member Amber Rudd.

To working class people who bothered to watch, the attempts to talk up the Tories' record on employment, equality and even anti-racism will have rung hollow. For millions the past seven years of Tory-led government have meant unending austerity, poverty and insecurity.

May's pitch for recasting the Conservatives was a contrived and trite soundbite: "the British dream." What this actually consists of is watering down and repackaging some of the anti-austerity statements that proved so popular from Jeremy Corbyn at the June general election.

But May's desperate attempts to feint left on some issues - combined with an attempt to make political ideology the main battleground - only opens up more fronts for her beleaguered party. If the unions take a lead and call concerted national action, we can kick the Tories out.

On higher education, we were promised - not the complete scrapping of fees and student debt - but that the proposed increase in fees would be frozen pending a review into student finance.

That might satisfy the Tory membership. But we're not sure it will go down well with those currently starting university, who stand to leave with debts of over £50,000.

On homes, May promised that government would "get back into the business of building houses." But her proposal to pump just £2 billion into building 'affordable' homes - which councils and housing associations must bid for - is a drop in the ocean. It will only build around 5,000 homes a year. Also bear in mind that 'affordable' means up to 80% of sky-high market rates.

May's call on developers to "do their duty" and build more, rather than hoarding and speculating on undeveloped land, means nothing. Under successive Tory and New Labour governments the developers have been allowed to run riot.

On schools, the NHS and taxes we were offered more of the same.

The 'free school' backdoor privatisation programme will be accelerated. The only mention of the NHS was May's hypocritical tributes to doctors and nurses - the end of marketisation will not even be countenanced. And on tax, she said Corbyn "wants to pile on taxes to business just when we need them to invest."

The real centrepiece of May's speech, and the conference as a whole, was an attempt to rouse her tired and divided party to "win the battle of ideas in a new generation all over again." (Read more in last issue's editorial - 'The nasty party turns on itself... but the Tories must be driven out' at socialistparty.org.uk.)

She made a rallying call for the Conservative Party to "defend free and open markets with all our might." This is an acknowledgment of the growing popularity of socialist ideas, particularly among those younger voters enthused by Jeremy Corbyn's anti-austerity Labour leadership.

So while trying to steal Corbyn's clothes, she made a passionate defence of markets, calling them "the greatest agent of collective human progress ever created."

In the past 30 years or so the Tories, and their New Labour echoes, have at times had to defend the neoliberal vision of totally untrammelled privatisation and market competition. But now the Tories find themselves having to defend the very idea of the market - the basis of capitalism - itself.

In spite of May's claim that markets have pulled millions out of poverty, the reality of life for the vast majority of people on this planet says otherwise. Child poverty in Britain alone is the highest it's been since 2010, and globally eight people own as much as the poorest 50% of the world's population.

While huge steps forward are made in the development of new technology, it is used to make a tiny minority even richer through increasing casualisation and insecurity for workers. It's no wonder the free market model of production and distribution finds itself increasingly under attack.

The speech will be best remembered for comedian Simon Brodkin making it up to the stage and handing May a P45, saying "Boris asked me to give you this." Many will see this as another reflection of how weak May's leadership and the Tory government as a whole is. Anyone can now see that a serious, mass movement of workers and young people, including coordinated strikes, could topple this government.

The fact that the top of the Tory party now feels forced to fight on ideological terrain is a very welcome development. It opens up the opportunity to discuss genuine socialist ideas - and build the fight for real change in society, that could see the Tories and ruling class as a whole all handed their P45s.