Having alienated most of the US population (and the world) with his vile, bigoted and threatening comments, US billionaire president Donald Trump has now railed against North American football players

Millennials, loosely defined as those born between the 1980s and early 2000s, are significantly more anxious than the generations before us

CWI broadcasts new channel - SocialistWorld: Over 350 members of Socialist Alternative from across the USA met recently for its first ever national summer school 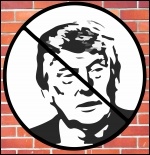 Build the movement to defeat Trump

No Ban, No Wall Trump's vile racist ban on the rights of millions of people from seven Muslim-majority countries to travel to the US has been met with a mighty movement of US workers and young people. Demonstrations at the airports have been combined with strike action by taxi drivers

The huge turnouts to the anti-Trump 'women's marches' on 21 January shocked even the organisers. It is now vital and urgent that that this is used as a launchpad to build a sustained, democratic, international movement with a strategy to win and a vision of a socialist alternative.

The case for a united and ongoing mass mobilisation: Inauguration protests can serve as a launching pad for a massive grassroots resistance to Donald Trump's new administration, which can push back his agenda. But this will require an active ongoing mobilisation linked to a strategy of independent grassroots struggle.

No to racism, sexism and attacks on workers' rights: On 20 (the day of Trump's inauguration) and 21 January, we are joining with others to call for millions across the United States and worldwide to come out in mass demonstrations and student strikes to begin building a powerful grassroots resistance.