Mexican police shot dead ten people, mostly striking teachers, in the southern state of Oaxaca. In response to this brutal repression teachers have blocked highways leading to fuel and other shortages.

US presidential election: Despite left-wing presidential candidate Bernie Sanders saying he will work with his rival Hillary Clinton to "stop Trump" and "transform the Democratic Party", millions of his supporters are looking for a way to continue the "political revolution".

The Socialist Party is a campaigning party. We are involved in many day-to-day battles in defence of working-class people - from opposing evictions, to campaigning to stop hospital closures

Socialists in the news in US: Speeches by Socialist Party co-thinkers in the United States, Socialist Alternative, have been going viral across the pond.

The US presidential election campaign represents a turning point in the country and the struggles of the working class and all those exploited by capitalism.

Confusion, soul-searching and outright horror. These words could accurately describe the response of the establishment press and political figures, world over, to the growing support for Bernie Sanders

US elections: The opening US presidential primaries showed support for 'non-establishment' candidates in both the Republican and Democratic Party caucuses

Seattle's political revolution continues: At the time of writing, 55.5% of voters (15,054) in Seattle's District 3 have chosen Kshama Sawant of Socialist Alternative (US co-thinkers of the Socialist Party) to serve another four years on the city council. 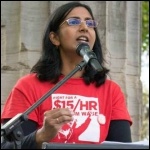 Socialist Alternative and Kshama Sawant have achieved another momentus victory in Seattle!