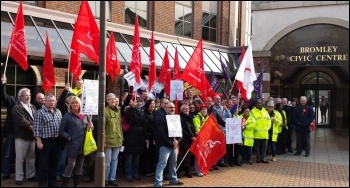 Bromley council is a template for Conservative austerity plans. But the heroic stand of Bromley council employees is a foretaste of the colossal struggles to come.

Since January, members of general union Unite have taken over 25 days of strike action. The union has called more strikes on 7 and 8 July to coincide with Osborne's budget statement.

Bromley's Tory administration wants to privatise almost all services, reducing in-house staff from 4,000 to 300. It has slashed union facility time to prepare for this (see issue 859).

It claims to need £50 million worth of "savings" - namely cuts - this year. But it has £130 million reserves. And it has somehow found the money to buy a Holiday Inn on the Isle of Wight!

If Tory plans are successful, Bromley will become a 'commissioning council' whose only role is to contract-out services to private vultures. Immediate plans are to privatise all libraries and the Astley Centre, which provides day care for adults with learning disabilities. If sold, Unite says the centre will close by the end of 2016.

Already strikes have been complemented by fantastic support from the public. When library workers held stalls across the borough, service users queued up to sign the union petition. A demonstration on 13 June included over 300 trade unionists and local people. This shows what a well-organised, fighting union branch can do to mobilise strong feeling in the community to defend services.

Attacks on the union

Hence the council's attacks on unions organising its workers. The secretaries of the two main council union branches, Unite and Unison, are Kathy Smith and Glenn Kelly. They had been working full-time for members. Their union facility time has now been withdrawn, and they have been sent back to their original council roles.

Kathy and Glenn are now forced to work until all hours of the night just to keep their branches running. The council claims this is merely a money-saving measure.

Yet Unite's offer to pay for Kathy's full-time release was flatly turned down. This demonstrates once and for all that the attack is political, in line with national Tory plans to shackle trade unions.

The assault on public services is also national. Our unions must do everything in their power to build a national fightback. Unfortunately, union leaders are yet to take the necessary steps.

The bureaucracy of Unison, the main union in local government, has been more intent on fighting socialists within the union than attacks on jobs and services. As part of a witch-hunt against Socialist Party members, Bromley Unison branch was effectively closed down.

It is a testament to their determination to fight that many workers joined Unite. When a suspension over trumped-up charges was finally lifted, Glenn was re-elected Unison branch secretary.

Unison is now set join Unite in the next round of strikes. The Socialist Party welcomes this.

On picket lines in Bromley and elsewhere, the Socialist Party demand for a 24-hour general strike has been very well received. This mood is reinforced by a number of recent union victories around the country. Still, union leaders doubt the resolve of working class people to struggle and win.

The Tories might think they can get away with anything. But in fact this government is weak. The struggle must be escalated - in Bromley, and nationally - if we are to stop the wholesale destruction of public sector jobs and services.