On 28 October, 1.4 million ballot papers will go out to Unison members

Hugo Pierre, a Socialist Party member, is standing as a candidate for Unison general secretary. The Socialist will be running a series of articles over the coming weeks

The Covid pandemic has exposed what decades of underfunding, cuts and privatisation have done to our public services

Despite their claims of "partnership" between central and local government, it's clear the Tories have not involved councils in their Covid-19 planning at all, writes Hugo Pierre, Unison union national executive committee member (personal capacity).

Unison has started a six-week consultative ballot of 150,000 school support staff in England for strike action against cuts to jobs, pay and conditions.

Vote TUSC to fight racism, cuts and privatisation: Hundreds of people marched in Brixton when the Windrush scandal broke, and then an important protest took place in central London on 28 April, called not by any organisation but by individuals who see the need to fight

When the government announced a new website to show the widespread racial inequality in Britain, many will have viewed it as a sick Black History Month joke

Short reports on some of the latest trade union struggles including Bromley library victory, academy opposition in Camden and a Liverpool dockers strike.

There is an alternative, Mr Biggs 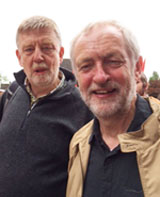