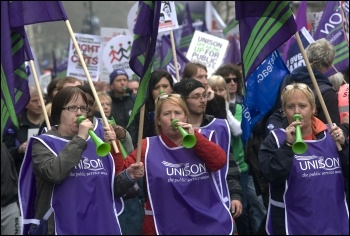 Given that the financial situation of most councils in England, Wales and Scotland is considerably worse than in pre-pandemic 2018, Northamptonshire may have been the first council (for twenty years) to declare itself bankrupt, but it will certainly not be the last if mass opposition is not built to oppose council cuts.

Unison needs a strategy to defeat Tory cuts and demand funding. And of the candidates standing to be the new general secretary of Unison, only Hugo Pierre has the programme that can achieve this.

Unison estimates that there is a current shortfall in funding of councils of £10 billion for 2020-21. And this figure is growing day by day, as councils have to fund shortfalls in income, such as losses of charges and taxes, and increased expenditure due to Covid-19, but are not fully reimbursed for this by central government, or by the Welsh and Scottish devolved governments.

Unison says that if £10 billion of cuts were made equally to all council services, £1.9 billion would be slashed from children services, £1.1 billion from environmental services (which includes cleansing and refuse collection) and £3.5 billion from adult social care (that is already in crisis).

The devastating reality of these cuts could be a loss of 51,000 children's social workers, 141,000 adult care workers and 46,000 refuse workers. If the funding of social care (as has been the case in the past) and public health was protected, other services such as housing, planning and environmental services would face cuts of 54%!

This devastating shortfall in funding to councils, coming as it does after ten years of Tory cuts passed on by the SNP in Scotland and Labour Welsh government to councils, will be a potential extinction event for many local authorities. While the dinosaurs could not be blamed for not seeing the asteroid coming, and of not understanding the impact it would have, that is not the case with Labour, Plaid Cymru or SNP councillors. They were fully aware of the consequences of administering Tory cuts for council services and the working-class communities they were elected to serve.

The Tories to date have successfully used Labour, Plaid Cymru and SNP councillors to do their dirty work for them. Labour councillors have been compliant in assisting the Tories in reducing council budgets to line the pockets of their super-rich friends. They also, by disillusioning working-class and middle-class voters, contributed towards the Tory general election victory last year.

However, despite their protestations to the contrary, there is something councillors can do to stop council cuts. But unfortunately, to date, Unison, which is affiliated to the Labour Party and is the biggest local authority trade union, has not called on Labour councillors to refuse to implement Tory cuts. It has not even attempted to organise national action to defend council jobs and services. Motions to Unison's national conference or local government conference calling for national action against council cuts are ruled out of order (and never debated by conference) on the grounds of legal jeopardy.

If Unison's bureaucracy spent as much effort defending council services as it does trying to prevent the union discussing them, we would be in a far better place. The reality is, the current national leadership has not put any pressure on Labour councillors to refuse to implement cuts. Unison currently has no strategy to defeat the cuts, other than to ask Tory ministers and lobby Tory MPs to find the additional resources to fund the shortfall.

The evidence is clear. Good arguments about the merits of local government will not win the day. The Tories want to dismantle and reduce the cost of local government as much as they can get away with. With no threat of national industrial action, there is no pressure on this Tory government to make a U-turn as it has on many other issues.

Hugo would ensure that the union's energies are focused on how to organise national action to defeat the cuts, as opposed to the current leadership which spends its time finding a way to stop it happening.

Hugo also calls for Labour, SNP and Plaid Cymru councils to implement needs-led no-cuts budgets, and for councils to join with Unison, and the other local authority unions and other councils, to build a mass campaign of opposition to Tory cuts.

If Labour councillors, MPs, MSPs in Scotland, and MSs in Wales, back cuts, then Hugo says Unison should withdraw funding from these individuals. Very importantly, if Labour councillors won't implement Unison policy, then Hugo calls for branches to have the right to decide democratically to support other labour movement candidates who will, even if they are not in the Labour Party.

At present, little pressure is put by Unison on these Labour Blairites and other councillors to defend council services, with some notable exceptions at branch level, particularly where Socialist Party members in Unison have an influence. This would not change if one of the other candidates was successful, because even if they wished to put pressure on councillors (they don't mention that they want to do this), they don't have the programme to do it. It would be business as usual for Labour councillors doing the Tories bidding.

Only Hugo has the programme to fight and defeat Tory cuts. The Tories have found an orchard of money trees to bail out big business. A fraction of this cost would fully fund councils. But if they won't feed hungry children at the cost of £20 million in England, they won't fully fund councils without mass coordinated national action. Vote for the only candidate who will lead that fight. Vote for Hugo Pierre.

Lockdown 2 and schools - what Hugo has to say 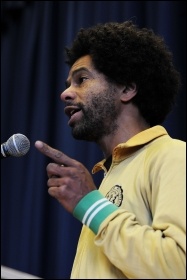 "Schools are going back after half term, and school support staff and teachers will be facing a situation they would never have been in if the government had followed a lot of the scientific advice that it had been given about making sure that the half-term break was longer. A 'circuit breaker' could have limited the spread of this disease.

I agree with the National Education Union's (NEU) statement which says that schools should be closed during the new lockdown to make sure that it is effective.

Schools are at the heart of our local communities, but they are also, unfortunately, the centre of many of the outbreaks of infections that are taking place. If we had a proper test-and-trace system that was implemented and developed during the lockdown, then the time that we have for a new lockdown would be put to good use.

If I was general secretary of Unison now, I would be wanting to meet with all of the other trade union leaders to see that we carry out a really thorough campaign to make sure that track-and-trace is brought back into the public domain; that it's organised by local authorities in partnership with local health protection agencies, to make sure that we have an effective system of controlling this disease - unlike the shambolic situation that we've seen until now.

I hope that other education trade unions co-sign the NEU's petition, and we do whatever we can to present it as a joint one to the government.

However, we know that in and of itself that is not going to be enough, and as trade unions we will have to do what we normally do to keep people safe. If necessary, that means taking industrial action.

Of course, we will campaign and put on whatever pressure we can, but we also have to have that threat of taking industrial action to ensure that our communities, our members, are kept safe from Covid." 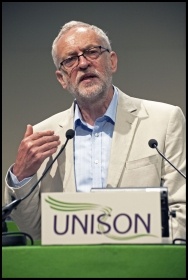 "Many Unison members will be shocked at the news that Keir Starmer has suspended Jeremy Corbyn and removed the Labour whip from him.

In order to win the Labour leadership, Keir Starmer tried to dress up in some of Corbyn's clothes, claiming he wanted 'unity' in the party. Six months later he has suspended Jeremy Corbyn from Labour membership.

This confirms the position I have argued for in this general secretary election, that Unison needs an independent fighting political voice. I am the only candidate in the election to have said we should only use our members' money to politically back those who back us, and the policies we stand for. And it shows the other candidates are completely out of touch with the mood of members and what we need.

Why is it that MPs who vote for benefit cuts are welcome in Keir Starmer's Labour Party? Why is it that those who voted for cuts in councils and for privatisation of public services, or for the right of state agents to commit crimes while spying on trade unionists and socialists, are welcome in the Labour Party, as are those who campaigned for a 'hostile environment' for migrants?

Jeremy Corbyn, who as Labour leader in 2017 achieved the biggest increase in a general election for any party since 1945, is not antisemitic.

Antisemitism must of course be taken seriously and combated, and all other forms of racism. This, however, is a cynical attempt to use false accusations of antisemitism to attack the left.

Starmer has laid down a clear challenge to the trade union movement. The choice is clear - accept having no party that represents the interests of the working-class majority, or stand up and fight!

If I was general secretary of Unison I would immediately contact Unite and other trade unions to call a conference of the workers' movement inside and outside of the Labour Party, to fight this attack and to discuss how to ensure workers have a political vehicle that does fight for their interests.

In the midst of the worst economic crisis since the 1930s - with unemployment spiralling and children going hungry - a mass socialist voice, including at the ballot box, is desperately needed.

If this step is not taken from the top there will be many workers and young people, who will be prepared to do so anyway."

Unison branches should be allowed to support them. Not a penny more to cutters and privatisers."