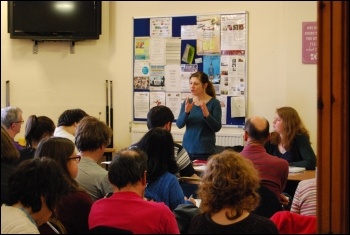 34 delegates attended in the recent East Midlands Socialist Party conference in Nottingham to discuss the political situation and prospects for building the party in 2019. It was lively and full of discussion and debate, many giving their views and reports of what they've done - a great way for members to connect.

Rob Williams from the executive committee introduced the morning discussion on political perspectives - in which he touched upon the developing crisis in Venezuala, the 'gilets jaunes' (yellow vests) movement in France, the slowdown and contradictions in the world economy and, not least, the crisis in British politics over the Brexit impasse. This latter crisis could go on for weeks and months but we need to prepare for an early general election.

Rob emphasised that the worker's movement must lead movements against the Tories and austerity or else this can leave a political vacuum for the populist right to exploit.