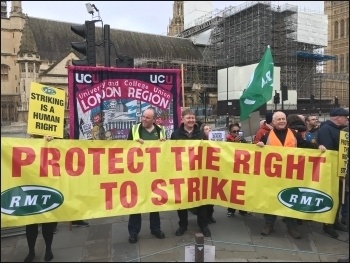 The mask has slipped - almost the first act of Boris Johnson's new government was to use the Queen's Speech to prepare new anti-trade union legislation. So much for Boris trying to portray himself as pro-worker. It's the same old story, or rather same old Tory!

This will be a government of and for the rich, against the working class. Like all Tories, Johnson recognises the power of the unions. With over six million members it is still potentially the most powerful force in society - as long as it is mobilised to fight. 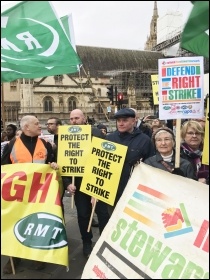 The RMT has shown over the last three decades that militant trade unionism wins for workers and therefore attracts new members. Under the late general secretary Bob Crow, the union grew by 40% on this record of action. Such an increase across the union movement would see it rise by two-and-a-half million members!

Over the last few years, the RMT has been to the fore in fighting to stop train companies getting rid of guards. In December, RMT members on South Western Railway took 27 days of action in what is a strike over passenger safety.

As commuters usher in the New Year and are hit with yet another fares rise, they should see that their best protection for their income and safety are the rail workers and their unions. Johnson, however, is firmly on the side of the privateer bosses, who have collectively put £4.4 billion into the pockets of their shareholders in the last ten years.

The right to strike is on the line. Royal Mail workers smashed the undemocratic voting thresholds in the most recent anti-union law, brought in by the discredited former Tory PM and fellow Old Etonian David Cameron.

The Trade Union Congress was found wanting then, with not one national demonstration being organised against the Trade Union Act 2016. Neither the postal workers' union, CWU, (currently in dispute with Royal Mail bosses over widespread management bullying, and attacks on workers' terms and conditions) or the RMT, or any other union, must be left to fight alone as it will be yours next.

We can win and push back austerity, zero-hour contracts, attacks on pensions, and so on, if the union movement fights together.

The French bosses thought president Macron was invincible, yet the current strikes against his pension attacks is now the longest for 50 years - since the revolutionary general strike of 1968.

If we mobilise, we can take on Boris and defeat him and his Tory government.