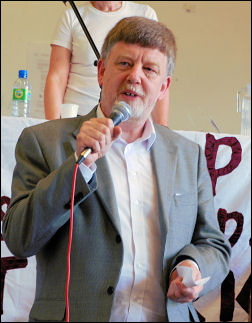 "You know Dave Nellist and the Socialists - they are the ones who stand up for people like us". This was the comment of a woman to her daughter at one of our recent campaign stalls, a sentiment that is more and more common among working class people across the city.

The local and general elections are coming at a time when ordinary people across the country are being made to pay for a crisis not of their making - and Coventry is no exception. Once the home of household names such as Peugeot and Massey Fergusons, the city has been at the epicentre of the deindustrialisation of the UK economy. This is further typified by the announcement that Stadco, a car parts supplier could now close with the loss of 165 jobs - the company suffered greatly from the collapse of MG Rover.

With unemployment rates already high in the city, the biggest local employer, Coventry City Council, has announced it is looking to cut up to a quarter of its jobs. It was only the Socialist Party councillors who voted against a plan for £72 million worth of cuts over the next three years. This was proposed by the Tories and every Labour councillor supported it - saying there was no alternative.

Our two councillors, Rob Windsor and Dave Nellist, are the only public representatives on the council to consistently side with working people. We are saying to voters: The establishment parties have over 50 voices on the council - that's why we need to re-elect Rob! 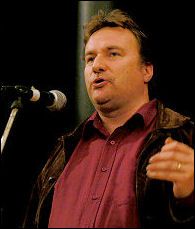 Rob Windsor is standing for re-election in St Michael's ward - where he was first elected in 2000. With Dave Nellist, Rob has lead many campaigns both in the ward and on a city wide basis.

He is a key figure in the campaign against the use of private finance in the NHS, recently presenting a thousands-strong petition against the £2.7 million profit that was made on the car park at the city's Walsgrave Hospital.

While our local Labour MPs such as Bob Ainsworth and Geoffrey Robinson promoted the Private Finance Initiative (PFI) as 'the only game in town', we socialists campaigned against it, calling for a fully funded, publicly run health service.

We now see the results of PFI. Like a vampire only entering your house when invited, PFI can only get into the NHS if asked to, and it's the establishment parties that have this blood on their hands. Incredibly Labour councillors say they are 'concerned' about the hospital parking costs - shame none of them did anything about it!

Like many inner city, deprived areas, St Michael's has a high population turnover and Labour have attempted to use this to their advantage. When they say that 'only Labour can stop the Tories in St Michael's', they are relying on new people not being aware that the Tories have no chance of winning, and that there are socialists elected in the area.

As well as the Socialist Party defending Rob's council seat in St Michael's, Dave Nellist will be standing in Coventry North East constituency in the general election. What a contrast there is between Dave Nellist, pledging to be a worker's MP on a workers' wage, and the Coventry North East incumbent, lavish expenses-claiming, warmongering Secretary of Defence, Bob Ainsworth.

Also, we will be launching an extended challenge in the local elections and in the other parliamentary seats in the city, with all our candidates seeking to be part of the recently formed Trade Unionist and Socialist Coalition (TUSC).

We have gained the respect of thousands of working class people in the city, with our consistent campaigning on dozens of issues such as the war in Gaza, PFI, council cuts, and privatisation. We received official thanks from the PCS and TSSA unions for supporting their recent strikes, and helping to organise solidarity.

Coventry voters will have a clear choice - more of the same and worse, or a fighting socialist opposition to the economic crisis and the establishment parties.