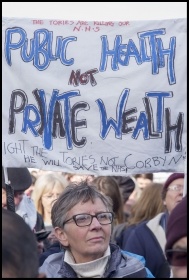 Around 70 people lobbied Liverpool council's 'Health and Wellbeing' board on 11 January to protest about 'accountable care' proposals.

Accountable care is the latest Tory plan to move towards privatisation of the NHS, where an accountable care organisation holds a long-term contract to oversee several health services, on a fixed budget.

Hospitals, GPs, district nurses, health visitors, care homes and home care would all be in one budget, and the contract could be run by an NHS trust, but is more likely to be run by companies like Virgin, or a private US-based healthcare company.

The majority of the protesters were members of the Merseyside Pensioners' Association, but they were joined by supporters of the Liverpool Against Cuts, pro-NHS campaigners, and several of the 'Liverpool 47' councillors, who defied Tory cuts in the city during the 1980s, in a lively protest.

50 of the protesters were allowed into the meeting, and Mayor Joe Anderson agreed to submit a resolution to the city council rejecting sustainability and transformation plans, accountable care systems and accountable care organisations.

This episode shows that pressure on councillors on NHS related matters can, and does achieve results.