Socialism 2010: ideas to fight the cuts 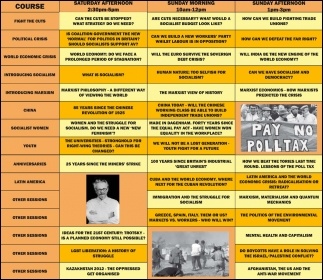 If you're opposed to the Con-Dem cabinet of millionaires making working class people pay for the bankers' bailouts then you should attend Socialism 2010.

There is a relentless drumbeat, pushed by big business politicians and their big business masters, of 'public sector cuts are necessary - there is no alternative'. But the Socialist Party does not accept this.

Fighting back and organising against the cuts will take centre stage at Socialism 2010, especially in sessions such as 'Can the cuts be stopped? What strategy do we need?' and 'How can we build fighting trade unions?' Trade union activists and community campaigners will be running these sessions, discussing in detail the best way to build the anti-cuts and trade union movement.

Having an alternative is vital to being an effective anti-cuts campaigner. When they say socialists are 'unrealistic' or that our ideas are 'unaffordable' we need to be able to hit back with clear ideas and arguments.

Socialism 2010 will be a showcase for the socialist alternative to cuts and austerity. The recession and the economic crisis has shown the limits of the capitalist free market and the relentless pursuit of profit.

Socialism 2010 will argue and explore the case for socialism, for democratic economic planning and workers' control and management in sessions such as 'Are cuts necessary? What would a socialist budget look like?'

Inseparable from this is the burning question of building a political voice for working people that can challenge the anti-working class agenda of the three main parties. All governments that support the continuation of capitalism are supporting cuts.

At Socialism 2010 we will have sessions asking the questions 'Is coalition government the new "normal"?' and 'Can we build a new workers' party whilst Labour is in opposition?' as we put forward a strategy to deal with the political crisis posed for working class people.

If you want to get organised and prepare for the battles that are coming, book your ticket for Socialism 2010 today!

Saturday accommodation and full crèche available. See website, phone or complete form below for more details and/or to book your place.