Can a future nuclear conflict be avoided? 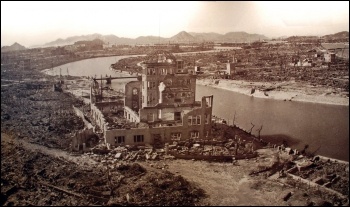 Seventy years ago, on 6 August 1945, a single bomb dropped by a US bomber on the Japanese city of Hiroshima killed between 90,000 and 166,000 men, women and children. Half died immediately, the rest later from burns, radiation poisoning and other injuries. The world had changed forever. The atomic era had begun.

The idea of a bomb of this awesome power had sprung from the new physics of the 1930s. Between 1939 and 1945 British and American physicists worked feverishly at Los Alamos, New Mexico, to build such a bomb in the mistaken belief that the Nazis were doing the same thing and might succeed first.

But the defeat of Nazi Germany in May 1945 gave work on the bomb a new focus - the war against Japan, which had already cost the USA 100,000 lives.

The dropping of the bomb on Hiroshima, followed a few days later by a second bomb at Nagasaki, brought Japanese surrender - but at the cost of up to 250,000 lives in the two cities.

Why were the bombs used? The official reason was to avoid a million casualties in a bloody invasion of Japan. But there was a second likely motive for the bombing of the strategically unimportant city of Nagasaki. The great fear of US capitalism was the threat of 'communism' as embodied by the Soviet Union.

The power of the Soviet Red Army sweeping across Europe, coupled with revolutionary movements springing up in France, Italy and Greece sent shivers down the spines of capitalists. The bombs were a deterrent to what they saw as Soviet expansion.

In fact, after 1945, some US strategists recommended a 'pre-emptive' nuclear attack on the Soviet Union before they got atomic weapons. But in 1949 the Soviet Union tested its own nuclear weapon. The UK joined the 'nuclear club' in 1952.

The very name Hiroshima - the single plane with its murderous payload, the mushroom cloud, the ruined city, horrifically burned bodies, disfigured survivors, radiation sickness and nuclear fallout - has become a symbol for the ultimate power of modern warfare.

Hiroshima triggered huge anti-war movements. In Britain in the 1960s, CND (the Campaign for Nuclear Disarmament) mobilised demonstrations of hundreds of thousands, and raised public awareness about the futility of 'nuclear deterrence', the dangers of radiation and of nuclear waste.

Today in Britain, both Tories and Labour are wedded to the 'upgrading' of the nuclear arsenal. Both agree to replace ageing Trident nuclear missile submarines at a cost which the Ministry of Defence puts at £20 billion but which opponents reckon would be nearer to £100 billion. These sums are far bigger than Osborne's latest welfare cuts.

The Trident submarines are based in Scotland, and the Scottish National Party's call for their removal has popular support. The prospect of a future independent Scotland has put the question of Trident and its possible relocation, on the agenda.

But the idea of an 'independent British nuclear deterrent' is a relic of its days as an imperial power. It is neither independent, nor a deterrent!

The missiles could only be fired with the agreement of the US military. But in any case, who do they deter? They did not deter the Argentine military dictatorship from invading the Falklands (nobody suggested 'nuking' Buenos Aires!).

Is nuclear war still a threat? There are an estimated 16,000 nuclear weapons in the world, over 90% held by USA and Russia, but also by the UK, France, India, Pakistan, Israel and, lately, North Korea. This is more than enough to wipe out most of the human race (and most other life too).

Despite a recent ratcheting up of super-power tensions over Ukraine, nuclear war between America and Russia is highly unlikely. And while Israel might threaten a strike against Iran's nuclear facilities, to actually fire a nuclear missile would be suicidal.

But a nuclear 'accident' remains possible, as does the use of radioactive nuclear material to make a highly destructive 'dirty bomb'. Moreover, the takeover of a country like Pakistan, which has nuclear weapons, by forces such as the Taliban or Isis, would create new dangers.

It could not be ruled out that under conditions of crisis, unstable warring regimes could spark a nuclear exchange.

And 'peaceful' nuclear power plants around the world have highly destructive fuel and waste which could be used to make weapons. Such material has certainly gone missing from a defunct nuclear reactor in the Democratic Republic of Congo, and in some of the former Soviet republics.

Even in Britain, it is not clear how and where nuclear waste is stored and how safe it is. How much more precarious is the situation in countries in the throes of civil war?

Nuclear weapons cannot be uninvented. They exist, the knowledge to make them exists, and no amount of pledges to disarm by world capitalism would prevent them being made again in future.

The only guarantee that such weapons will never be made, or used, is a socialist world. The working class of all continents, working together to build a better world for all, will decide democratically that nuclear power, if it is used at all, is only ever used for peaceful purposes.

The best legacy of Hiroshima would be a future of peace and plenty, where production is planned for the benefit of all of humankind, and where war of any kind is a thing of the past.