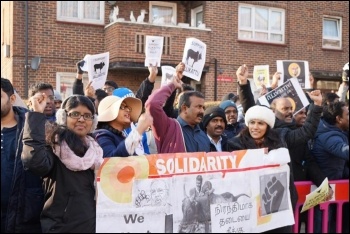 The current prime minister, Narendra Modi, leader of the right-wing Hindu nationalist BJP, has implemented many policies with the aim of whipping up Hindu nationalist sentiments in the hope of securing its fast-diminishing vote base.

The government recently attempted to introduce a ban on eating cow meat which led to attacks on oppressed-caste people who get labelled as 'beef eaters'. Cows are considered sacred to Hinduism.

Fascistic forces such as the 'RSS', that is linked to the BJP, use issues such as this in the hope of building their support base. They have been trying to use similar tactics in many states. But in Tamil Nadu, where the BJP has miniscule support with only one narrowly elected MP, various such attempts have failed in the past.

In Tamil Nadu many issues have caused anger, particularly among young workers in the cities. These include how the BJP-dominated nearby Karnataka state blocked the Kaveri river water supply to Tamil Nadu, and the recent demonetisation mayhem throughout India.

Tamil New Year celebrations include a four-day festival which marks the winter harvest. The tradition of cooking harvested rice on the first day has survived to this day.

However, celebrating cows and bulls on the second day had become ceremonial. Only a few villages maintain the tradition of Jallikattu.

Though the Tamil New Year is celebrated largely by Hindus, recently its character has been changing as something celebrated by all Tamils and is seen as part of the Tamil identity.

A ban took place following a successful court case brought forward by Peta, a well-known animal rights organisation. This ban is seen as a direct attack on the Tamil-speaking people and gave rise to a mass eruption of anger.

What made this eruption the largest since the 1960s is its character in defence of Tamil identity. Although some of the most visible slogans centred on Jallikattu, it is in general linked to Tamil aspirations for national rights. The majority who took part in the protests are city workers who had never been to Jallikattu or will ever take it up.

Placards such as "save our farmers" and chants against the state and central government politicians and parties were a common feature. It was clear that protesters wanted to inflict a blow against the Modi-led government.

The protest quickly spread across the world in places where big Tamil populations live. The spontaneous uprising in Tamil Nadu of tens of thousands of students and young workers has gained the support of and inspired many.

However the protest that was largely mobilised by social media lacked leadership and direction. No attempt has been made to put forward a coordinated set of demands and clear tactics.

Some argued for an organised approach and the need to prepare for future challenges, including possible attacks by the state.

The movement forced the government to give some concessions. They have now temporarily removed the ban.

But rather than calming things down, the situation became more explosive. This response is correctly seen by many as political and directly aimed at Modi's central government.

The state and the media immediately began a propaganda campaign against the youth and students labelling them "terrorists", "traitors", and "anti-Indian infiltrators". This was followed by a brutal attack by the Tamil Nadu police.

Although this attack caused riots on the streets, videos are now emerging which clearly show the police themselves setting fire to the public properties to vilify students and young workers. Many young people have now been detained and many more, including children, were injured.

Tamil Solidarity supports the right to assemble and protest. We also demand that all those arrested be immediately released and adequate medical and other facilities are made available to the victims of the brutal police attack. There should also be a public inquiry into the actions of the police.

There was a real sense of unity which will not go away easily; rather it can fuel the struggle to come.