Reports have surfaced that the National Union of Students (NUS) is facing a profound financial crisis, estimated to lead the NUS to bankruptcy by April 2019. 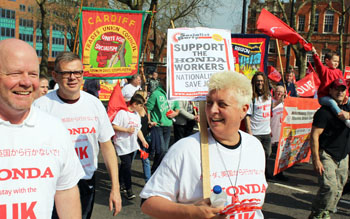 Demonstration to save the Swindon Honda plant, 30th March 2019, photo by S. German

Demonstration to save the Swindon Honda plant, 30th March 2019, photo by S. German

Unison trade union members at universities across the UK voted 62% in favour of strike action after rejecting the employers' final offer of 2% (with slightly higher increases for the lowest paid of up to 2.7%).

"A university going bust is more likely than at any other point in the last generation". These were the words of Nick Hillman - former advisor to Tory universities minister David Willets.

Over 1,000 teachers, lecturers and college students marched through central London on 17 October to demand the end to Tory cuts and austerity in education.

For the last two years I've been working as an apprentice through the training provider Aspire Achieve Advance or 3aaa.

The Socialist Students stall outside this year's freshers fair at De Montfort University, Leicester - demanding 'Tories out - Corbyn in' - got a very good response with over 30 sign-ups.

Do you have something to say? Letters to the Socialist's editors. Varoufakis wrong on far right; GDPR at uni; street fighting; rail safety 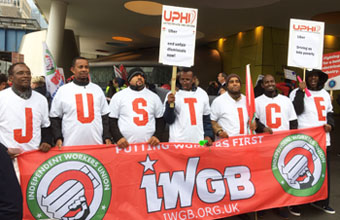 Precarious workers marched in London against the gig economy, 30.10.18, photo by Paula Mitchell

Students demanding an end to Tory cuts and austerity in education. London, 17.10.18. photo by Isai Priya

Reports from some Socialist Students stalls around the country

Fight for education, Tories out now: The Tories - the politicians responsible for trebling students' tuition fees, decimating our public services, and presiding over a generation-defining housing crisis - are in chaos

Students were delighted to see socialists campaigning at Hull University