Eleven members of the Socialist Party and Socialist Students from Swansea and the surrounding area attended a Black Lives Matter (BLM) demonstration, wearing masks and socially distancing, on 27 February

Speakers from several unions called for an end to the public sector pay freeze.

A Cardiff member of Socialist Students wrote to the Welsh first minister.

"It's good to see you back, we need people fighting back". It was encouraging to hear this from one passer-by at the Socialist Party campaign stall on 11 July. 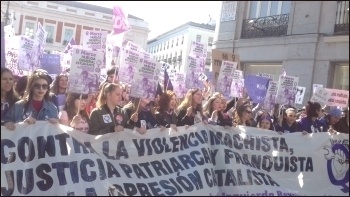 Over 2.5 million students emptied the classrooms on International Women's Day - 8th March - in the Spanish state, called out by Libres y Combativas. photo by LyC